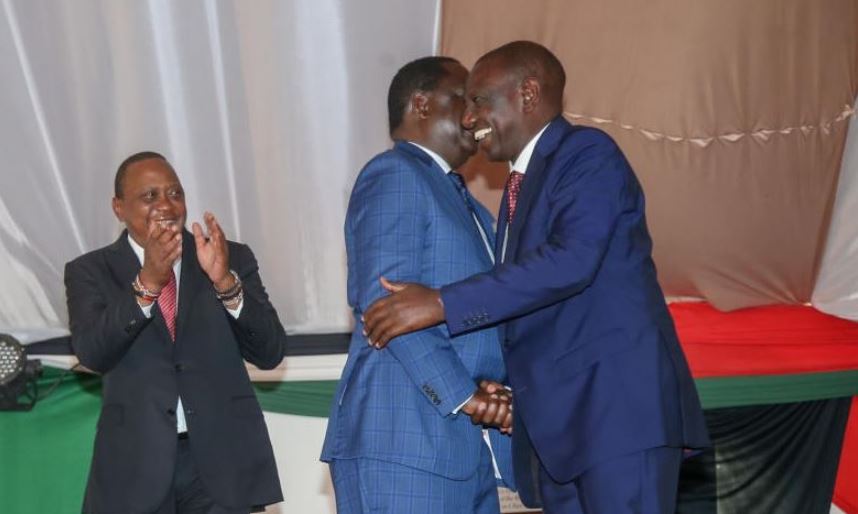 Kenyans might be in for another political handshake after the 2022 elections, former Chief Justice Willy Mutunga has forecasted.

Speaking on Citizen TV’s Daybreak Show on Wednesday, Mutunga said a handshake between the top presidential candidates Raila Odinga and William Ruto is likely to happen if there will be a threat to peace after the August elections.

According to Mutunga, foreign forces will have to mediate between the two to protect their interests.

“Of course one of the factions is going to lose and if there is a threat of peace, the foreign interests… the Germans, British and the Americans will just tell them to have another handshake. And so, we should expect Ruto and Raila to have a handshake, consolidate their dictatorship and that’s why the issue of people’s opposition is important,” said Mutunga.

The former CJ at the same time urged Kenyans not to buy into the promises pledged by politicians during the campaign period.

Mutunga expressed doubt that the current crop of leaders cares about transforming the country.

“The important thing is to talk to the Kenyan people and tell them very clearly that these factions are not going to fulfill their promises, they have never done that in the past and they have no agenda for implementing the constitution which is a blueprint for our development,” said Mutunga.

He added: “The political space is occupied by the factions that we see and they have occupied it for the last 58 years and in those years, they have not done anything to convince me that they care about the country’s transformation.”

Lift Sanctions Against Zimbabwe, President Kenyatta Urges International Community < Previous
Here’s What’s Trending in Nairobi This Thursday Next >
Recommended stories you may like: