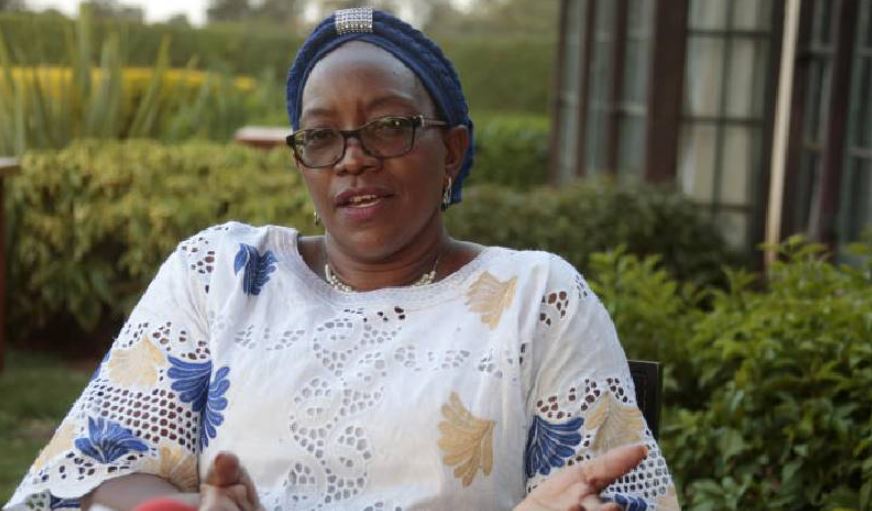 Former Water Cabinet Secretary Sicily Kariuki is among a host of civil servants who resigned last week to run for elective posts in the August Election.

Kariuki will be contesting for the Nyandarua gubernatorial seat.

In her first interview after resigning from the Cabinet, Ms Kariuki talks about her experience in the Cabinet, her plans for Nyandarua, the National Youth Scandal (NYS) scandal and more.

You have been in public service for a number of years, part of it being in the Cabinet since 2015. How has your experience been?

The experience has been one of satisfaction, a lot of challenges but also a fair share of achievements. I always consider it a privilege and great honour, and one journey that has helped me impact lives and become a role model for women and girls who aspire to be in leadership.

What would you consider as your major achievements?

When the Uhuru government came in, I first served as the Principal Secretary supporting then Cabinet Secretary Felix Kosgei. Devolving agriculture and coming up with policies and negotiated positions with the county governments. Importantly, we were able to interrogate the status quo by coming up with programmes to support farmers through subsidised fertiliser.

When I was elevated to the Cabinet to head the Public Service, Gender and Youth, what was exciting was getting into NYS. I came in after what was called the NYS first scandal.

We had to do a lot of rebranding and bringing back the confidence of people in the service and at the same time progressing the programmes so dear to the president.

It is during that period that I visited 253 constituencies; in each of these areas, we were responsible for identifying youth, getting them into Saccos and commissioning them to be peace ambassadors.

I was also involved in gender issues. When I moved into the docket, I made the first attempt at getting the gender Bill go through, it failed despite the efforts and lobbying that we put in. It continues to be a failed project yet a very critical one.

My hope is that as we reorganise the parties through the nomination lists, we will achieve gender parity.

What are some of your lowest and highest moments in the Cabinet?

My experience in gender ministry: the fact that you put all energy and efforts and the Bill flops and you find out that it is not just men who did not vote but also women, meaning they (women) did not believe in it. That’s wasted energy.

Dealing with NYS — there was already an alleged scandal. You move in and think you have all the control and the right team and suddenly you hear rumours of another alleged scandal.

When I was promoted to the Health docket, my high at that time was implementation of the Universal Health Coverage (UHC) at pilot phase. The political class from governors believed we could do and it and so it was exciting. On Monday (February 7), I joined President Kenyatta to launch the reformed NHIF in Mombasa and I am very happy about the achievement.

You have exited the Cabinet six months before Jubilee tenure ends. Any unfulfilled projects?

In public service, you always tell yourself that a day will come and you’ll not have finished certain things. What I have trained myself is to have a team to ensure continuity when I am long gone. I will not sit here and regret that I have not done this and that. When I moved to Water, we achieved a lot.

We proved that it can be done in a record time. In response to Covid-19, we sunk 193 boreholes, 100 of them in one hundred days. I told the team that there were legacy projects that have to be delivered before President Uhuru exits. We completed 113 projects in the last financial year.

You have thrown yourself into politics which is a totally different ball game. How prepared are you for the Nyandarua governor race?

Many people were caught by surprise because it’s not easy for you to move from what is considered a comfortable space in terms of resources, influence and status.

But politics is not a decision that you make because you dreamt about it last night. Going into politics requires you to consult enough people. You have to ask yourself if you are prepared, do you know what it takes, are you ready to be ridiculed, ready to be abused? All those emotions I have gone through in the last two years.

But getting a needy person in the village saying to you that I think you can bring a difference in my life. I need water and I think you can do it because you have done it elsewhere. It has been tremendous listening to women. I have done a lot of listening. It is a journey not of convenience but a journey of commitment.

Has Governor Francis Kimemia failed the people of Nyandarua?

I don’t think I want to sit here and talk about someone who is not here with us. It is not fair. When we get to the point of having all aspirants sit to speak about the issues, that would be fair.

What do you want to fix in Nyandarua?

There are a lot of things that need to be attended to. I am privileged to have visited Kitui and known that we can have cottage industry. Governor Charity Ngilu has done it using the same resources devolved to all the other counties.

Any plans in reviving the production of pyrethrum?

The farmers want it back. In 1990s Nyandarua was in the top league. There is still demand for pyrethrum globally and a renewed push for this to happen. CS Agriculture Peter Munya is helping farmers to get planting materials. There are also other options of diversifying. I have been on record supporting diversification and to introduce crops like avocado. The people are hardworking, what they need is water, roads, link to credit facility and storage facility.

You have picked to run on Jubilee when there is a growing perception that the party has lost its influence?

The party leader has expressed himself loudly that you got to choose to politic from Monday through Sunday or do development and only do politics when the window for politics opens. He is coming back to do politics six months to the election. He has been doing development for four and a half years.

I really think it is an attempt by the opposing side to create that impression. I would ask you to watch the space. The party is coming back and it would be loud.

Would you consider running as an independent in the event you don’t get the party ticket?

How would you describe your relationship with Uhuru, Ruto and Raila?

Uhuru has been my boss; he is a very supportive boss and very intelligent. You don’t tell him this today and a different thing tomorrow. Extremely supportive, what you require and he is convinced that the intervention you are proposing helps for the bigger vision, you will get.

DP Ruto is intelligent as well; he is hardworking and also a very good person.

As for Raila, I was not privileged to work with him closely at the technical level.

However, I have seen him in the last few months expressing himself. He is a leader who listens a lot. He doesn’t just give up and has sacrificed a lot.

He is also a very determined person; you don’t run for president four times if you are not determined.

CRAZY – The Funny Memes Going Viral on Social Media < Previous
Corrupt Leaders Should Be Executed in Public – Speaker Muturi Next >
Recommended stories you may like: