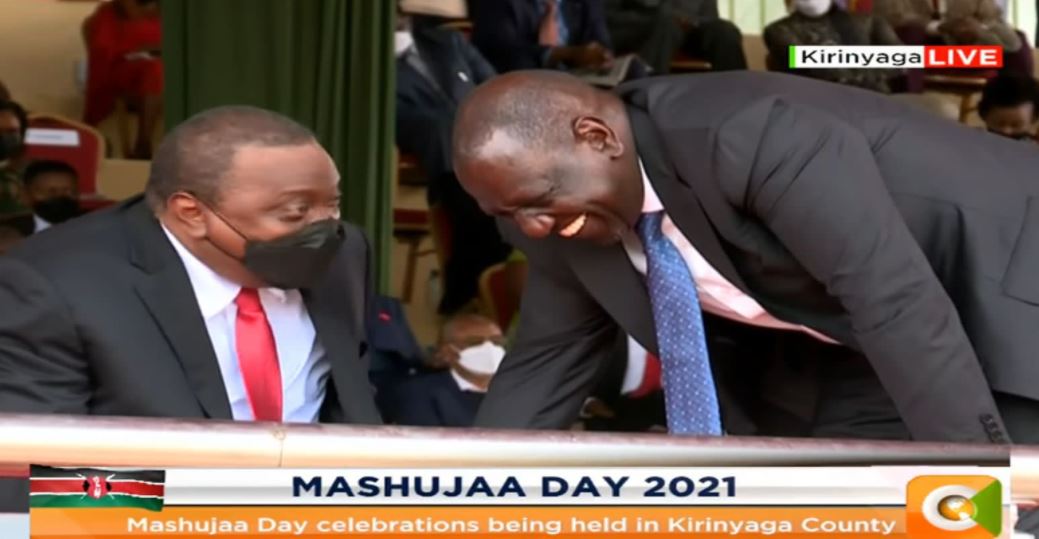 For the first time in a long while, Deputy President William Ruto on Wednesday humbled himself before his ‘master’ Uhuru Kenyatta during the Mashujaa Day celebrations in Kirinyaga.

The two have not been seeing eye to eye for months but on Wednesday, they shared a surprising tête-à-tête that has now become a viral video.

In his speech, DP Ruto was full of praise for President Kenyatta saying his legacy was unparalleled.

According to Ruto, the country has seen an unprecedented transformation in the last nine years under Uhuru’s leadership.

“You have been a transformational leader in Kenya. You have set the standards for the leaders who will come after you. “On this day, we also celebrate you as our leader,” Ruto said.

The DP went on to assure the President that he would build on his legacy with his bottom-up economic blueprint.

“I want to assure you that together with my competitors, we will build on your legacy. We will not let any project remain incomplete,” Ruto said.

Adding: “As your deputy, I will build on your legacy and the Big Four Agenda and together with the Bottom-Up approach, the country will go to greater heights.”

DP Ruto further assured that under his leadership, he would ensure Kenyans remain peaceful and tolerant of each other.

President Uhuru – Kenya to Manufacture COVID-19 Vaccines By Easter < Previous
This is What’s Trending in Nairobi Today Next >
Recommended stories you may like: