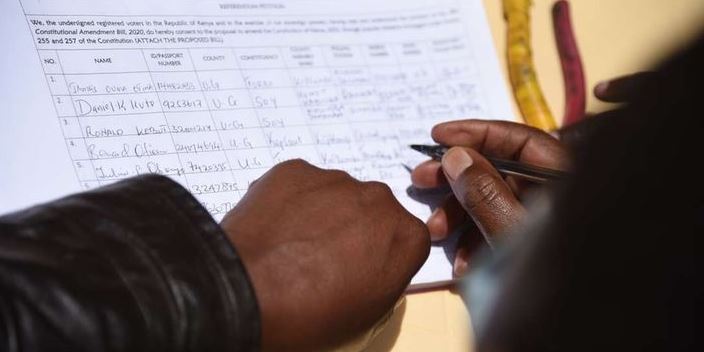 A police officer who allegedly destroyed a booklet containing signatures of BBI proponents has been charged with malicious damage to property.

Constable Peter Langat forced a chief at Lelekwe village in Kipreres, Bomet to suspend the signature collection exercise in the area after the officer tore the document and threw it into a stream.

Kipreres sub-location assistant chief Robert Katam said he was in the process of collecting the signatures when a visibly drunk Langat, who was on his pass leave, approached him and requested to append his signature.

It was then that Langat allegedly tore off two pages serialized as 0685180 and 0685183 and tossed them into a river together with the booklet.

“The chief retrieved the booklet which was already soaked in water and brought to the station where he reported the matter…we immediately sent officers to his home where they managed to arrest him,” Gikeri said.

“The motive as to why the officer committed the act is unknown.”

The officer appeared before Bomet Principal Magistrate Lilian Kinyale on Thursday and denied the charges.

The magistrate released the accused on a Sh20,000 cash bail with a surety of a similar amount.