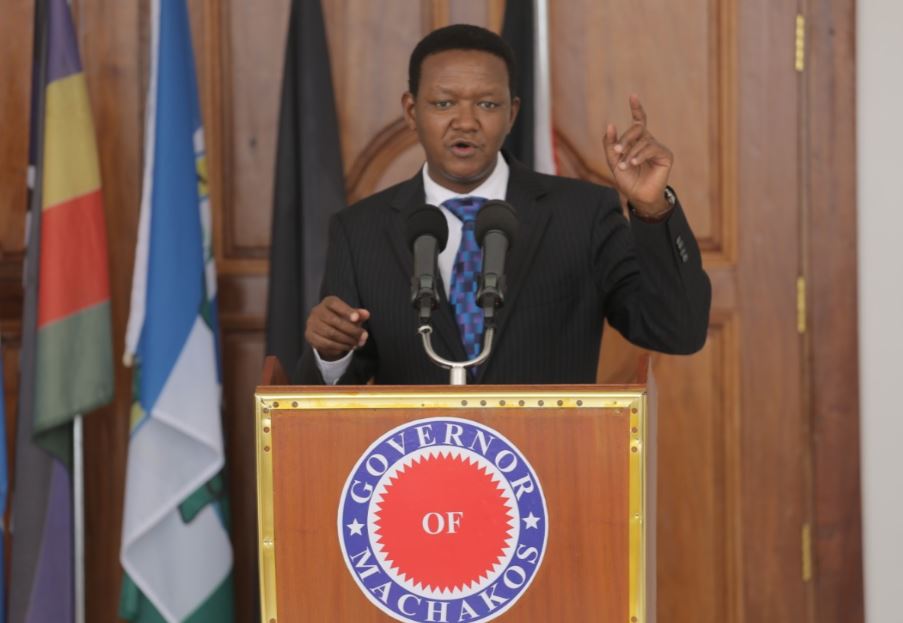 On Sunday, September 6, Machakos Governor Alfred Mutua officially joined the presidential race. He made the announcement in a colorful ceremony held at the Alfred Mutua 2022 Campaign Logistics Centre in Athi Business Park, Machakos in front of supporters and TV cameras.

Mutua slogan of ‘The Fresh Movement’ promises to prioritize fighting corruption. Other than fighting graft, Mutua also made job creation a pillar of his candidature. He promised to create 5 million jobs, citing his success as government spokesman and governor as reason why he is best suited to deliver on this.

In an interview with Sunday Standard, Mutua spoke more about his vision for the country.

The key message of your announcement was that Kenya needs to start afresh. Why should Kenyans choose you?

Because I represent the present and the future of Kenya.

The people are worried that the present crop of leaders all have baggage. They have corruption allegations. Some of them have questionable links but I’m somebody who is fresh with no baggage and is capable of returning Kenya to where it is supposed to be.

Currently, the country is split between pro- and anti-BBI camps. Are you aligning yourself to either of the camps?

I support a position that is going to remove the tribal question from the government. I am for a movement that is going to add more money to the counties. We need to be able to have a country less intolerant to each other because we are adding the seats that you can compete for and also because of county governments.

Is a law to increase allocation to counties really necessary when the Constitution only states a minimum?

We need a law because as it is, the government gives to counties according to its priority. For instance, health and agriculture are fully devolved functions but look at how much money remains with the national government. When it is set in the Constitution as either 40 or 45 per cent, they will have no option but to give that money to where it is supposed to go. We don’t want to beg, it is the right of every Kenyan to get that money.

You started your speech by lamenting the lack of access to clean drinking water and to maternal healthcare. How is Machakos County doing in those sectors? A key pledge you made is the creation of five million jobs in three years. As the Machakos governor for close to eight years, are there jobs you have created for the locals?

No leader can do everything because you’re dealing with a finite amount of money, but we have been able to make great strides. We have provided over 400 kilometres of piped water, we have sunk over 500 boreholes, 493 dams and wells. We have not done everything, but we will change the lives of our people.

Machakos County no longer receives food relief. We are at the level that you don’t need to face the shame of being fed by others.

We have fixed our healthcare and provided sufficient ambulances so that no woman will give birth on the roadside. We have a cancer centre that patients access for free.

I have put 78,000 people into jobs. Registration of business is up 40 per cent, so basically we’re rolling back poverty.

In Ukamabani, where you hail from, Wiper leader Kalonzo Musyoka and Makueni Governor Kivutha Kibwana are also seeking to run for the top seat.  Don’t you think that crowds the field?

It is good for democracy that there are many of us with ambition. But some leaders are better than others.

The people of Eastern Kenya are clever enough not to waste their votes when they feel that they need one of them to be the president. They’ll go for the leader that is electable nationwide. People realise that even if your base votes for you and you don’t get votes from other parts, you won’t win. You cannot be president by getting all the Kamba or Luhya votes.

Are you planning to reach out to them?

We have sat down with Kivutha and agreed that whoever is electable will lead and when they get there they will not forget about the others in the formation of a government. I told Kalonzo (Wiper leader) I’ll support him if he is electable but he needs to support me too. It’s because I know that I’m more electable.

I have gone across the country and I’ll look at the polls and I know that from this region I’m the one who’s more likely to be president.

In your speech, you said Kenyans suffer because of our style of politics and the way we choose our leaders. How will you address this?

I was referring to the style of politics that whips up communities against each other. Every political cycle it is ethnic balkanisation. It is rewarding people based on political affiliation not on ability. How many leaders do we have who have done nothing to help anybody in their life but their label is ‘political kingpin’. That is why we suffer.

Corruption has been a major issue in successive governments. How differently will you deal with the menace?

Fighting corruption is not difficult. The first step is to eliminate bureaucracy. Bureaucracy breeds corruption. When it takes you 35 signatures to set up shop what you’re actually creating is room for corruption.

We need to look at corruption the way we look at elections and politics. When you win an election and someone goes to court the case has to be heard within six months. Why is it that corruption cases are open-ended? The trial should take a maximum of six months by the time someone is handcuffed and the time they are found guilty or innocent.

To do this you have to empower the Judiciary by giving them more money and build confidence in it.

Asset recovery is also key. If you cannot prove where something came from then let it revert to the State. We will institute lifestyle audits. If I am a public officer and I cannot account for my wealth then it is definitely the proceeds of corruption.

Part of the reason we have so much corruption comes from how our politics is funded. Patronage also leads to corruption. How will you fund your campaign?

I plan to use my own sources. I will also seek support from like-minded people who support my ideology ­— wealthy people who want to stop worrying about the safety of their families and who want to have a leader that will make the streets safe.

Kenya’s has been politics of coalitions, a coming together of different units since 2002. Do you think the public has a right to be sceptical of whether you really intend to go all the way?

I am going all the way. I have invested heavily and I am consistent. I don’t start races that I don’t intend to finish. Coalitions will be there, but it will be others coalescing with me.  It is not me abandoning my dream to support other people because I am at the right age and at the right time.

You are going to run against people who have been at it for years and campaigning for months now. How do you plan to deal with that? Do you have a game plan yet?

We’ll catch up. That doesn’t worry me because we represent a different generation.

You are younger than William Ruto by a few years. How is that representing a different generation?

It is not a generation based on age. It is based on thought. The way they think Kenya should operate and how they approach things.

Kenya’s politics leans heavily on tribe and is ethnically charged. Do you have a way to counter this? How are you planning to win support from across the country; have you identified regional pointmen to help you rally for support from various communities?

Tribal kingpins are just people who are using their tribes to further their agendas. These leaders will keep you poor so that they become the ‘saviour’.

I’m not interested in being a kingpin of a tribe. I am interested in being the president of Kenya. I’m going to disprove the mentality that your base has to come from your tribe. Kenyans are starting to realise that Kenya’s problem is a class issue and not a tribal one.

What lessons did you get from leaders such as Martha Karua and Peter Kenneth who had a considerable buzz about vying for office, but their campaigns were unsuccessful?

That you cannot run a presidential campaign based on popularity on social media and the civil society.

You state that you are a “person who understands the system but is not a captive of the system”. Can you tell us about this system?

There are many decisions that affect the rest of the country that are being made in boardrooms. It is a partitioning of Kenya into tribal lines. People are brought to the table not because of what they offer, but on the basis that they will perpetuate a system of Balkanisation. I understand that system, but I am not a part of it.

Kenyans are still waiting for the Formula 1 track.

That plan is still alive. It is telling that you have a leader here who is ambitious to do great things. When talking about Formula 1 track, we’re talking about bringing a whole industry to Kenya. You want a leader who is innovative and who can dream big. If Kenya wanted, we could even have a space programme.