Duale to Retire from Politics If DP Ruto Becomes President 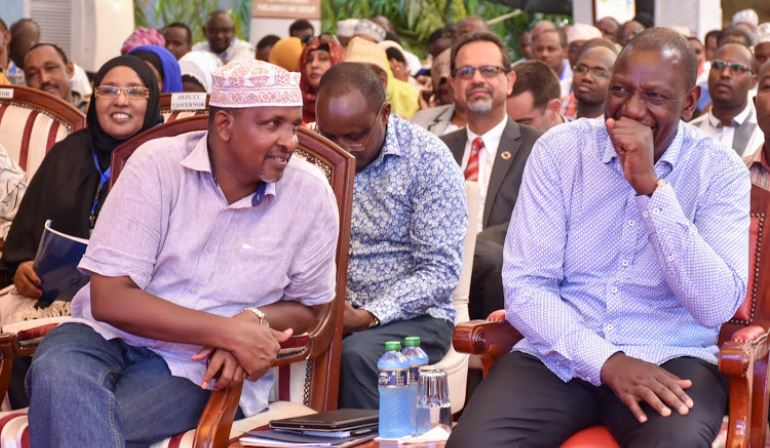 Aden Duale will retire from politics if Deputy President William Ruto becomes president in 2022, the Garsissa Township MP has indicated.

Speaking during an interview on Citizen TV’s political show, Newsnight, Duale reiterated his support for Ruto saying he could even serve as a clerk in State House if Ruto ascends to power in 2022.

“I have said in the past, if William Ruto becomes President, I will retire from politics. I can even serve as a clerk in State House,” he said.

Duale rubbished claims that the ruling Jubilee Party was divided, further maintaining that Ruto was the only candidate.

“DP Ruto is not the kind of person you abandon. He is a strong politician. I will support him in 2022. We have one party leader- Uhuru Kenyatta. Jubilee is united. The President and his deputy are united. Jubilee will go into the next election more united than it was in 2017,” said Duale.

“Uhuru Kenyatta has said and he is our party leader. William Ruto will go through the party nominations of Jubilee and Uhuru Kenyatta will support the candidate that our national delegate conference will choose. For now, the only candidate on the table for the Jubilee Party come 2022 Inshallaah is William Ruto.”

The outspoken politician also noted that the 2022 presidential election will be a two-horse race.

“In every election there are jokers. In 2022, it will be a two-horse race. The rest are donkeys. I can tell you for free. The presidential contest in 2022 will be between two people- William Ruto and Raila Odinga,” he said.

“I will be backing William Ruto.”

Bahati, Diana Newborn Baby Majesty Already a Brand Ambassador < Previous
Tax Evaders Be Warned: KRA is Coming For You With 11 Prosecutors From DCI Next >
Recommended stories you may like: