Echesa: DP Ruto Told Me President Uhuru was a Good Man to Work With 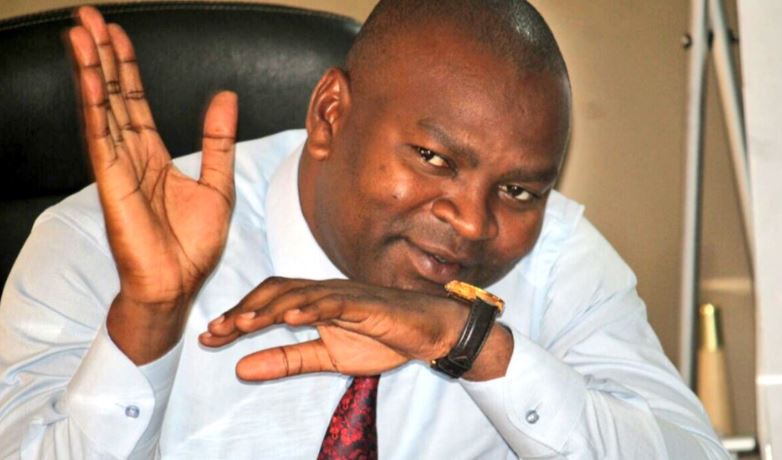 Former Sports Cabinet Secretary Rashid Echesa has still not found peace of mind following his sack after 13 months of service.

In an interview with the Star, the 35-year-old also talked about his rise to the Cabinet, his life outside the Cabinet, his relationship with DP Ruto, why he was linked to the recent killings in Matungu and his political plans.

Were you expecting to be named to the Cabinet?

It caught me by surprise, though I had worked hard for Jubilee during the campaigns. I, however, received it with joy and I thank the President for giving me the opportunity to serve.

What was it like working with the President and other Cabinet secretaries?

It was a wonderful experience. I worked very well with the President, Deputy President William Ruto and all my Cabinet colleagues. It was an experience of a lifetime and an achievement as my name will go down in history.

Did you know the President before or worked with him before?

I started out in politics by joining PNU, which formed a coalition with Kanu—whose party leader was Kenyatta—before the 2007 General Election. I had been appointed as one of the PNU coordinators in Western.

You are a close ally of DP William Ruto. How did you get to know him and start working with him?

From PNU I joined ODM because of pressure from my supporters in Mumias. I rose to be the youth leader but after the 2013 General Election, I got frustrated after we lost and because I could not even access party leader Raila Odinga—things just fell apart. I had met Ruto at numerous functions and after the 2013 polls I called him and he invited me to his Sugoi home where we talked and he convinced me to join Jubilee, which I did.

He told me that President Kenyatta was a very good man to work with. I told Ruto that selling Jubilee in Western would be hard. But he told me that even if I lost the election in Mumias, where I was to run for MP, I would still get a job through Jubilee. Indeed, I was appointed to the Cabinet. Since then Ruto has been a close friend and I know him as a man who works hard and keeps his word, values friends and can stick with a person he believes in through thick and thin.

You only served for 13 months in Cabinet, why do you think you were sacked after such a short time?

That is a question I still ask myself. I did not offend anyone. I was loyal to the President, DP and the government. It came as a huge shock and that is why I have repeatedly asked the President to tell me, and Kenyans, what I did wrong. I have tried all means to know the truth with no success. It hounds me and my family. Everyone keeps asking what I did wrong. It would give me peace of mind and clear my name if the President just told me my mistake. The manner of my dismissal has put me in a precarious position. Even Kenyans are asking did Echesa steal from government or what annoyed the President about him?

Have you tried to reach the President to ask him why he dismissed you?

Not directly, but I talked to DP Ruto. I believe by talking to the DP I have reached the President. In fact, I know Ruto talked to the President before I was sacked but as the appointing authority he had already made up his mind that I had to be fired.

Why do you think you were fired?

I think the President may have been misled. I know he now knows that he was misled. I cannot pinpoint who misled the President but politics is a game that entails a lot.

At one point you accused Raila of scheming to have you sacked. Do you think he is to blame?

I blamed him because at one meeting after the handshake he said the Cabinet would be reshuffled and the likes of me would be kicked out. I can’t say he is to blame. It’s the appointing authority who sacked me and he knows why.

Do you think your dismissal had anything to do with you close relationship with DP Ruto?

If that’s the reason, I would like to be told for my peace of mind.

There has been speculation on social media that you engaged in criminal activities, like being part of cartels printing fake money, hence, the reason why you were sacked.

I have no criminal record. I have never engaged in crime. If I had, I would have been charged in court. I have never been part of any cartel. I believe in honest and hard work, no shortcuts. That is why it’s important to me to know why I was fired. People have taken advantage of it to link me to all manner of ills.

Why were you arrested over the killings in Matungu constituency?

I was trailed by DCI officers after attending DP Ruto’s function in Ikolomani. I went to the DCI headquarters in Kakamega, where I was informed that I was under arrest for inciting people to burn a police station. They also asked me about a young girl who had been killed in Mumias, but I told the officers that they were insane for questioning me about things I did not know about. Some of the officers told me that they knew I had nothing to do with the killings but they were under pressure to arrest me. I was taken all the way to Nandi Hills and locked up. I called the DPP and asked him why I was under arrest and that’s when he called for my file and ordered our released as they had nothing against us.

Who do you think was pushing for your arrest?

At Nandi Hills, I thought it’s not possible for a person of my stature to be arrested without consultation between Interior CS Fred Matiang’i and the President. I could not understand why the President was allowing or subjecting me to such humiliation and torture. I thought of my young children, who are yet to recover from my dismissal, being forced to watch me getting arrested on TV for killing people.

But what is the truth about the Matungu killings?

After my release, I went back home to establish the truth. I think the police know what is happening but are not forthcoming. The so-called 42 Brothers gang had been killing people, starting with watchmen in Vihiga, when I was in Cabinet. The Matungu MP is related to me—he is my father. But I don’t relate with Senator Cleophas Malala, with whom I was arrested. I wonder how I could team up with my father and the senator to kill my own people. To what end? The killings must be thoroughly investigated rather than forcing police to arrest innocent people.

How is life outside Cabinet?

I’m now back home. I have gotten some rest and I’m trying to pick up the pieces and move on. I am only 35 and I have a great future with God’s help.

So what are you doing for a living?

I’m enjoying farming and working to revive all my businesses, including supply of farm machines.

What are your political plans?

When the right time comes I will decide. There are many seats right from governor of Kakamega and the others. I will definitely vie for one of them.

Will you still strongly back DP Ruto?

Yes, of course. Many people don’t understand him. He is a hard worker and a go-getter who believes in developing Kenya. He is kind and generous, not because he is rich but because he likes to share what he has with other people. This is a man I will want to ensure is elected as President in 2022.

What about the Luhya leaders interested in the presidency?

The likes of Mudavadi, Wetang’ula, Governor Oparanya and even Atwoli have been around for too long. They are spent forces who have been misleading the Luhya community and have nothing new to offer. Unlike Ruto some, like Mudavadi, are waiting to be given leadership instead of working to get it. That is why they don’t want people like me, who work our own way up. They may dislike me but in a few years they will all be irrelevant and youths like me will have taken over.

What were some of your achievements at the Sports ministry?

I restructured and streamlined operations, introducing an open-door policy—even cleaners had access to me. That is how I had managed to weed out cartels. I streamlined all sports associations, from athletics to cricket, boxing and even football. Harambee Stars are heading to Afcon next month because of what we did. The biggest challenge remains sports funding, which is so poor. We had fought to have a well-oiled sports fund and I was sacked two months after the ministry got about Sh2.5 billion for the fund. I wish my successor CS Amina Mohamed well and I know she will succeed.

If you were to meet the President, what would you tell him?

I would ask him why he sacked me. And if he could find it in his heart to forgive me if I offended him unknowingly.

I won’t give up in life. I remain Rashid Echesa and I have made history in my own way. I will live with the tag CS, even though it’s former for now. I do not know what the future holds for me. What I know is that there is God and my future is bright.