CITAM Bishop David Oginde Speaks on Money from Politicians, Reports of Being Richest Church in Kenya 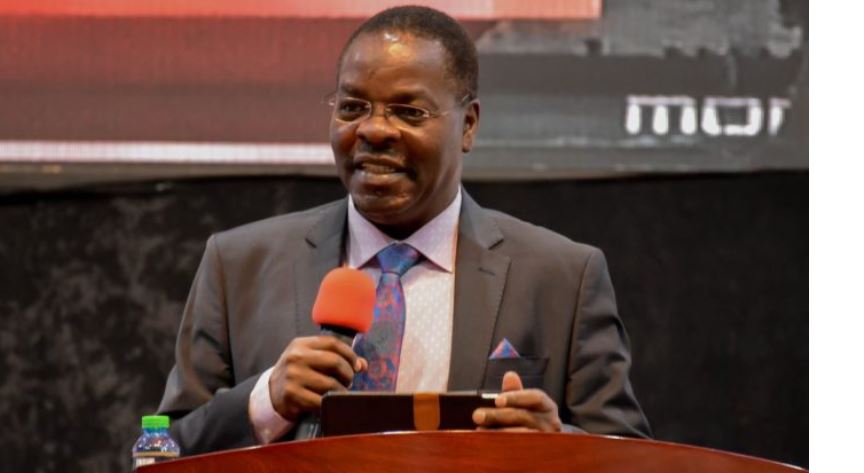 Bishop David Oginde of CITAM church was an architect before turning to the more fulfilling God’s work. He recalls questioning Christianity and God before finding his answers in the Bible.

He had finished studying for a degree in architecture at the University of Nairobi and had just started working for Fellowship of Christian Unions (FOCUS).

“Then I began to wonder if God is not real, where did everything come from? The Bible made more sense than anything else because without the story of creation and reality of God, everything else does not make sense,” said Oginde in an interview with Standard.

Mr Oginde also talked about claims that CITAM is the richest church in Kenya, politicians giving money to churches, and more.

Have you ever put your architectural degree into use?

Yes, I have. I have done several buildings on the side. I don’t miss it though because that would imply that I lost the knack for it somehow. If I wanted to design a building today, I would do it. I enjoyed it when I was a student. I still love it when I see good designs and love analysing buildings when I walk into some. But I also enjoy what I do now so I would say I miss it. I don’t have any regrets over the path I chose. As a Christian, I believe that our lives are in the hands of God. We may have our own plans but if you put your life in his hands, he has the prerogative to craft your path and I see this one as a path he charted out for me.

You are known to drop wisdom ‘bombs’. Pray do tell, how does one live a productive life?

We all have 24 hours in a day with a lot of things to do. How you budget your time will determine how much you accomplish. I work a lot with schedules and diaries, and it works. It’s all about setting priorities and disciplining yourself. There are things I won’t do, places I will not go, and parties I will not attend because they are not priorities. When I was appointed bishop, someone asked me how I was going to manage it all and I said if Barrack Obama (he was still President at the time) can spend time with his family and run America at the same time, then surely I can run CITAM. Obama could be president, play with his children and still take his wife out, which I find hard sometimes.

How often do you take your wife out?

Once in a while. We tend to go out more as a family than just the two of us. We spend most of our time doing church activities and occasionally go on holiday. With my children— a 21-year-old girl and 14-year-old boy—I enjoy watching movies with them, going out and so on. I love listening to gospel music and reading. Most of the material I read falls under my area of interest, which is leadership. After my Bachelor’s degree, I got a master’s degree in leadership and later a PhD in organisational leadership.So we should call you Dr Oginde. You’ve been married for 30 years. What can we do to make our relationships last?Trust and love go a long way. Live one day at a time and enjoy it. Don’t pick fights over insignificant things, like the amount of salt in food. Get to know your partner and what they love and work on giving them that. My wife Nancy likes scenic places, so once in a while we go to places with beautiful sceneries, just for her to revel in.

How did you meet her?

She was my vice chairperson in the Christian union at the University of Nairobi. She was studying law and it took fewer years to complete than my course did. She graduated before me and as we were parting ways, I realised I was going to miss her and wanted to keep her. So I proposed to her. Very quickly (laughs).

What has parenting together taught you?

Parenting is a very humbling responsibility because we try and help our children the best way we can but how they turn out is their responsibility. I teach them the same things I practice – honesty, integrity, forthrightness. My prayer is that they will uphold the same in all spheres of life. I remind them over and over again that the worst thing they can do is to lie.

What has life and age taught you?
I enjoy life. One of the things I decided a long time ago was that life is short, so I should enjoy it as much as I can. This means I don’t let many things trouble my mind. I don’t get into controversies. I don’t keep enemies and harbour bitterness. If you do me wrong I will tell you and try to iron things out. The next time we meet I will not be dealing with you on the basis of our disagreement the last time we met. In that sense, I live my life as a happy person. I try to be as honest as possible with people.And if I was to give life advice to someone, It would be that they should live a life of integrity, that fears God and respects people.

What would you say is your greatest accomplishment yet?

Having the privilege and honour to lead a church like CITAM. It has presented a unique opportunity to apply my leadership skills. By God’s grace I’ve seen the ministry grow to the level where people think we’re doing something good.And it is also the richest…That’s propaganda. We are not the richest. The acronym CITAM represents our core values – community, integrity, transformation, accountability and ministry. Under accountability we are deliberately and committed to accountability – to God, the government and to one another. Accountability to the government means we do everything according to what the law requires. For two consecutive years, we received awards from the Kenya Revenue Authority as the most accountable church in the country. Not because we are the best but because we do things according to what the law requires. And the reason people think CITAM is the richest church in Kenya is because when we hold our annual general meetings, we give an account of all the money we have received in a particular year, and an account of how we spent it, and all this information is published. When people see that they think it is a lot of money. It is just that most churches don’t do that, so they don’t know what other churches have.

Why did you decide to become a pastor?

I didn’t decide, it happened. My father was setting up churches when I finished high school, and one church did not have a pastor. He asked me to go to Bible school but that was not in my plans. When I finished my architecture degree, I was invited to work for FOCUS, an organisation that supports Christian unions in universities and colleges. I was a leader of the Christian union in university and because I had personally benefited from the organisation’s work, I decided to do it. My plan, though, was to work there for three years and move on to architecture.But three years turned to three more and another three and in the end I worked there for 11 years. When I was leaving, the church I was attending (Nairobi Pentecostal Church, now CITAM) asked me to join as an administrator. I said yes. When I reported, they told me the position was a pastoral one – I was to be a pastor who oversaw administration. That wasn’t a problem for me because I loved administration. Four years later a senior pastor left, and I was asked if I would take up the role. That’s how I got into mainstream pastoral work, serving as senior pastor for about four years at CITAM Karen and moved to CITAM Valley Road and the rest as they say is history.

What’s your stand on “dirty” money from politicians to the church?

This is a dilemma that CITAM doesn’t suffer because we don’t hold fundraisers. We don’t invite guests and announce their contributions. When we have a project, we will tell our members what it is and how much it costs and pass the offering basket around and whoever can give does so. No one knows what anyone has contributed. The same with offerings. We don’t know who has given and the amount given. When politicians come to our church, what they give is between them and God. And if the money they give is stolen money, again, that is between them and God.Money is not evil, people are. The concept of giving tithes and offerings is a part of the worship of God and has been there since time immemorial. This became dramatised with the rich displaying their offerings. When Jesus observed people putting in their offerings, he said the widow who gave two coins put in more because she gave all she had. And Jesus said your giving should be in secret, do not let your left hand know what your right hand is doing. Churches should institute systems where people don’t display what they give.What happened to teaching brethren about being good people? Does everything have to be about the gospel of prosperity?The gospel of prosperity is not a new thing. Paul talks about it in the Corinthians where he says, “We do not peddle the word of God for profit.” That’s how old the gospel of prosperity is. In other words, the gospel is not for sale. You don’t have to pay something to receive something. But unfortunately, there are people who have entered the so-called service of God—and I call it “so-called” because I doubt that they are serving God—whose only interest is money, and they come up with lots of gimmicks to get more and more of it. It’s very unfortunate because they are taking advantage of the poverty and desperation of people.

Does one have to pay to receive blessings?

You’ll find that those who push this message attract large crowds. Sometimes people believe you get what you pay for. That’s why some people may find it odd when I say God paid for everything, so you don’t have to pay for anything. Jesus died for your sins and you don’t have to pay to get saved.

Do you feel the preachers of prosperity gospel discredit your work?

No. If you have a product and someone releases a counterfeit, the public will identify the counterfeit products in time. I don’t even bring up the people doing gimmicks in church because people soon discover them. Our focus is on the truth because the truth never rots.Sometimes a member will leave and go to those churches that seem to offer what they want and after a while they come back and when they do, they find us still preaching the same thing. That’s how to win. Someone said the only way to know a fake dollar is to know the genuine one. You study the genuine one and know all its features and when you see a fake note, you’ll know right away. We don’t spend time telling them about the fakes; we tell them the truth that’s written in God’s word and once they know it, they can identify the fakes.

CRAZY: Funny Pics/Memes Going Viral on Kenyan Social Media < Previous
All The Trending Images This Monday Next >
Recommended stories you may like: