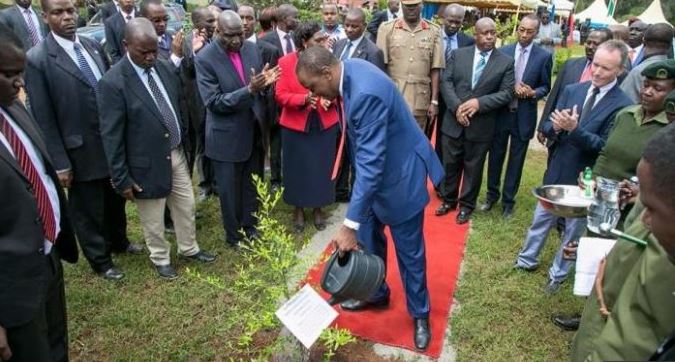 Speaking during a press briefing on Sunday, Mr Esipisu encouraged every Kenyan to participate in the exercise that is geared towards increasing the country’s forest cover.

“The President will lead this exercise, accompanied by Nairobi Governor Mike Sonko, here in Nairobi at the Moi Forces Academy. We encourage every Kenyan, and those who live within our borders, to plant a tree or trees wherever they will be on that day,” the State House Spokesperson said.

On boosting continental trade, Mr Esipisu said the National Assembly last week ratified the African Continental Free Trade Area (AfCFTA) and arrangements are underway to submit it to the Chairperson of the African Union Commission, in Addis Ababa, Ethiopia.

“As you know, it was the President’s absolute delight to be in Kigali not too long ago, joining fellow Heads of State in signing the AfCFTA. The AfCFTA will create a single continental market for goods and services, with free movement of people, goods, and services,” Mr Esipisu said.

He expressed optimism that the continental trade pact will lead to the accelerated pathway to integration, saying Africa is better off increasing trade with itself.

Rwanda and Ghana have both also ratified, now the race is on which country is first to officially submit that ratification.

At the moment, Mr Esipisu noted, intra-Africa trade is estimated to be around 12 percent which is relatively low compared to other regions of the world.

“Intra-European trade is estimated to be around 60 percent while that of Asia is around 40 percent. The establishment of the AfCFTA is expected to boost intra Africa trade to 22 percent by 2022. All this will provide substantial economic and social gains to Kenya,” he said.

The AfCFTA will lead to the creation of a wider and expanded African market, with a combined population of over 1.2 billion people and a growing middle class, as well as a combined gross domestic product of more than US$ 3.4 trillion. The African continental population is expected to reach 2 billion by 2050.

The State House Spokesperson pointed out that Kenya attaches significant importance to the Tripartite Free Trade Area (TFTA) and the AfCFTA because of the huge market and investment opportunities that they will present to Kenya.

The TFTA brings together member states of COMESA, EAC and SADC. At the moment, Kenya exports to Africa constitute 40 percent of total exports – the bulk of which are value added products.

“On the way forward, Kenya will continue to participate in the negotiations on the outstanding technical issues both at the Tripartite FTA and AfCFTA to secure Kenya’s trade and economic interests and realize the dream of a single continental free trade area,” he said.

At the regional front, Mr Esipisu disclosed that President Kenyatta will on Tuesday visit Namanga, on the border with Tanzania, to inaugurate a One Stop Border Post (OSBP).

“It comprises offices and space for immigration processes and verification; customs offices including warehousing and cold rooms for the goods traded across the border; and other facilities for improving trade across the border,” Mr Esipisu said.

The launch of the Namanga OSBP comes after the inauguration of the Busia OSBP in February this year by President Kenyatta and Ugandan President Yoweri Museveni.

The State House Spokesperson observed that the Namanga OSBP will boost trade by cutting the time taken to clear goods between the two nations and improving coordination and collaboration between the different agencies. This will contribute to a reduction in transport cost while at the same time increasing volumes of transit cargo through the Northern Corridor, he added.

“It is expected that time to cross the border will continue reducing. Furthermore, the opening of the Namanga One Stop Border Post will spearhead the ease of movement of goods and people within the region,” Mr Esipisu said.

He emphasised that the opening of the One Stop Border Posts underscored Kenya’s commitment to the AfCFTA, particularly its undertaking to the reduction of trade barriers and enhancing free movement of persons, goods and services.

Hilarious Meme Compilation (Tuesday May 8) < Previous
All That’s Trending in Nairobi Today Next >
Recommended stories you may like: