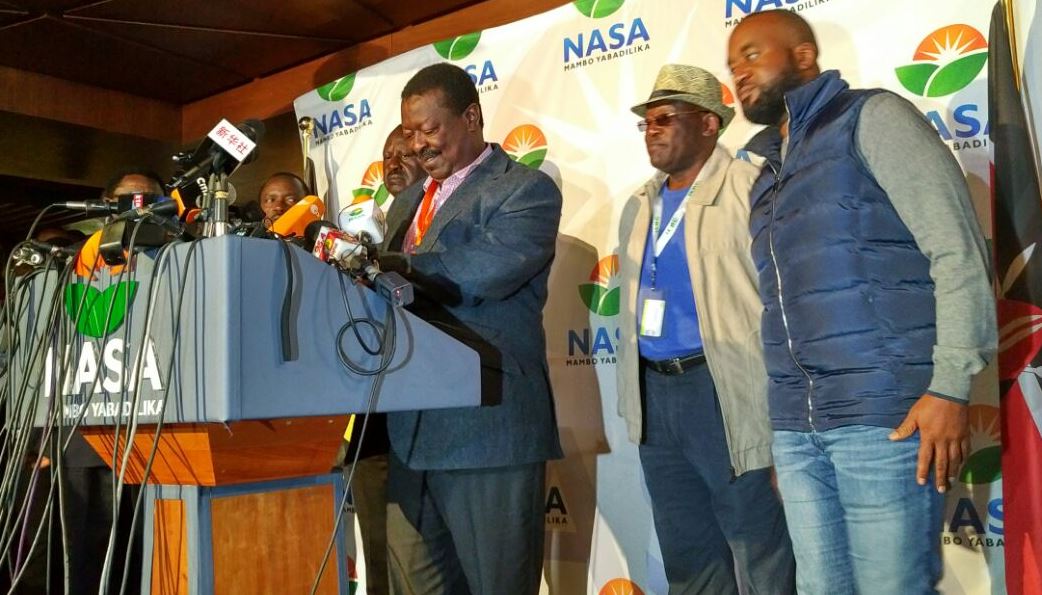 In an act of putting the country first, Kenya’s main TV stations have put an end to a TV press conference called by Nasa to declare Raila the president-elect.

The conference that ended a few moments ago was aired for the most part, but was cut short abruptly during the Q and A session. NTV was first followed closely by Citizen TV and the rest. Prior to this one, all other press conferences by both Jubilee and Nasa, and even by the various observer missions were aired live until the last question was asked.

Moreover, it appeared as though instructions were sent to stop studio commentators from talking about Nasa statements. On Citizen TV, Swaleh Mdoe specifically stopped one analyst from talking about it, stating ‘it has already passed’.

In the press conference, Musalia Mudavadi speaking on behalf of Nasa and flanked by top Nasa leaders; Raila Odinga, Kalonzo Musyoka, James Orengo and Hassan Joho, announced that they are in possession of new data direct from IEBC servers that shows Raila is ahead.

However, they refused to reveal how they came across this data, expressing the need to protect their sources.

Most people have however rubbished the numbers particularly because Jubilee has whitewashed Nasa affiliated party all over Kenya, getting majority in parliament, senate and even the Council of Governors. Also, literally all observer missions have given IEBC a thumbs up, calling the election ‘free, fair and credible’.

Furthermore, hundreds of sampled Form 34A show no discrepancies with what has been streaming on IEBC website.

After Uhuru and Raila, This Unlikely Woman Had The Most Votes in the Country < Previous
The Hottest Stories on the Internet Today (Friday August 11) Next >
Recommended stories you may like: