POLL: Was it Right To Snub Raila in Nyeri 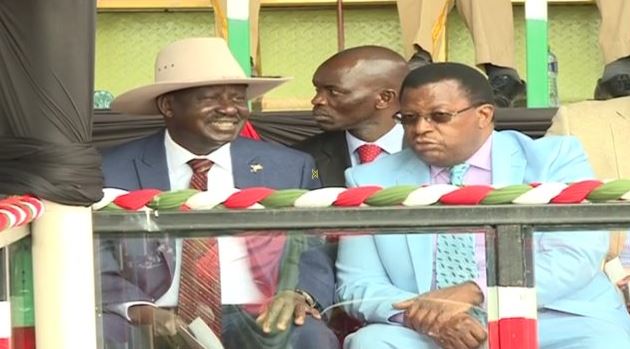 It may have been a colourful Madaraka Ceremony in Nyeri, but all everyone remembers is the snub given to Nasa leader Raila Odinga.

Raila had made a very public announcement that he would be heading to Nyeri for the national celebrations, and it would have gone without saying that at the bare minimum, he would be given a few minutes to address the residents and the country.

But it seems the Jubilee administration had other ideas.

After shamelessly addressing the crowd of 15,000 at Kabiru-ini Grounds and the nation at large in vernacular, Governor Samuel Wamathai invited Deputy President William Ruto to speak and invite the President.

Raila’s presence was not even acknowledged by the leaders, despite having been cheered greatly by the crowd as he arrived.

It was also a departure from Jubilee’s own tradition of acknowledging opposition leaders. Uhuru has himself in the past called Raila to ‘say something’ even after his own speech. Last year during the Mashujaa Day celebrations in Machakos, Kalonzo Musyoka was invited to address the nation.

In the Madaraka Day celebrations, it appeared as though even the sitting arrangement was designed to embarrass Raila. Though sitting in the main dais, Raila could only get a seat next to  National Police Service chairman Johnstone Kavuludi, despite having been a Prime Minister.

He silently and keenly followed the proceedings but most people commenting on social media saw the snub as disrespect and immaturity on the part of Jubilee.

”Your speech is full of unity and peace rhetoric and you fail to been recognize the presence of a national leader as Raila in attendance.” @KinyanBoy tweeted.

Do you think it was in order for the President to snub Raila?

All The Trending Images This Friday < Previous
SGR Schedule Released: When and How To Catch a Train To Mombasa.. How To Get To Syokimau Next >
Recommended stories you may like: