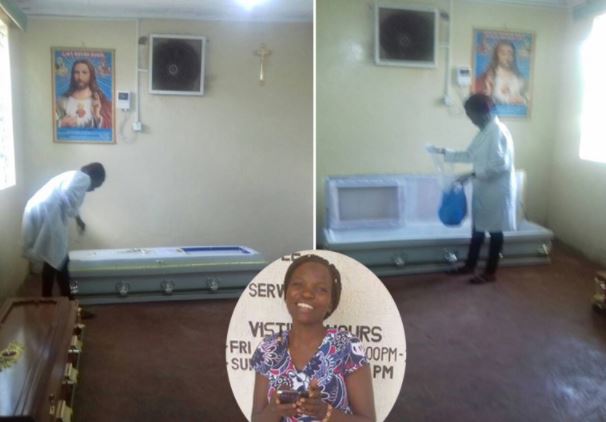 A Kenyan female morgue attendant, Alice Awuor Omito, has opened up about her work working with the dead.

One of the more staggering confessions Alice Awuor made is that preparing the dead for burial is what makes her happy, holding all other factors constant.

The 26-Year-Old mortician works at Rosewood Funeral Home in Rongo, Migori County. She began working as a morgue attendant at Star Mortuary in Kisumu two years ago before transferring to Rosewood in Rongo.

“I enjoy spending a better part of my working days with the dead. I can’t imagine staying away from them even for a single working day. I have to go and look at the bodies stored in freezers daily,” Awuor told eDaily.

Awuor, who dropped out of nursing school, fearing a future unemployment, added: “I discontinued my studies in nursing and pursued mortuary science because of available job opportunities in the latter field. I don’t regret changing professions, not one bit.”

She noted that mortuary science is a field dominated by male workers, but said that it does not scare her as she is often chosen over her male colleagues to do certain tasks of preparing the dead for burial.

The mother of one added that contrary to many people’s belief that morticians often use hard drugs before getting down to work, she has never abused drugs.

“When I was new in this job I had fears and challenges handling the dead, but now I enjoy every bit of my work. I adapted so fast and I am comfortable,” she said.

On the challenges she has faced on the job, Awuor said she was ditched by her ex-partner after he learned about Awuor’s career.

“My boyfriend recently dumped me when I told him that I work as a morgue attendant. Discrimination is just one of the several challenges I face for being a mortician. The challenges are normal though. No job is immune to challenges regardless its nature.”

PHOTOS – This ‘Nganya’ Can Take You all the Way to South Africa < Previous
Hilarious Meme Compilation (Monday June 12) Next >
Recommended stories you may like: