A desperate KDF hopeful has been arrested by military police with a forged KCSE result slip at Mweiga Stadium in Nyeri.

Dennis Kimotho Njaramba, 23, had altered the grades on all eight subjects of his KCSE results slip with a pen.

He was nabbed on the second day of the KDF recruitment exercise on Tuesday.

Confirming the incident, officer in charge at the center, Lieutenant Colonel Paul Aruasa, said that the man would not have made the cut either way as they were only accepting original KCSE certificates.

“Actually we are not accepting result slips but this young man went ahead to forge it which amounts to fraud,” said Lt Col Aruasa. 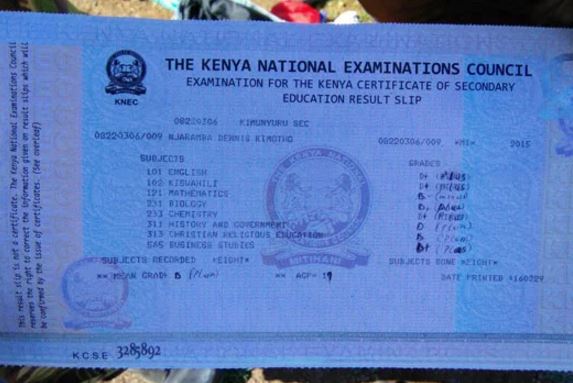 A second recruit was arrested at the same recruitment venue for threatening to join Al-Shabaab after failing a medical test.

Despite having met all preliminary qualifications, Hosea Ng’ang’a failed the medical test and was dismissed from the exercise.

Hosea, 22, was heard asking for the Al-Shabaab recruitment points and taken into custody.

Lieutenant Colonel Paul Aruasa said they decided not to take chances with the threat.

“He was found asking for recruitment centres for al-Shabaab so we took him in. Maybe he is just disgruntled but we would rather not take any chances because he could have actual intent to join the group,” said Lt Col Aruasa.

The two suspects were handed over to the general police and are currently detained at Mweiga Police Station for questioning.

Hilarious Meme Compilation (Wednesday May 17) < Previous
Ignore the Fake News. Rosemary Odinga is not Dead and has Returned Home (PHOTO) Next >
Recommended stories you may like: