Pregnant Jackline Mwende Opens Up About Cheating on Husband 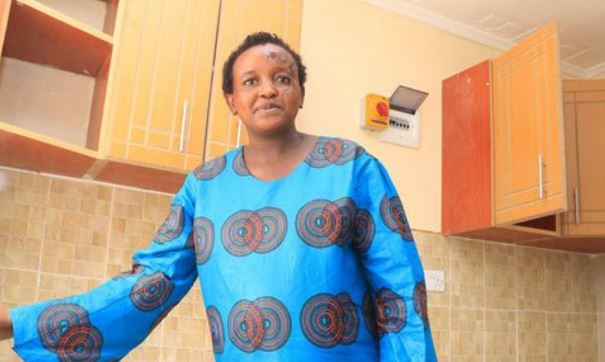 Jackline Mwende, the 28-year-old lady from Machakos County whose hands were chopped off by her husband because she could not bear him a child is pregnant.

However, the pregnancy is as a result of an illicit affair with a close friend she had been dating before she was attacked. She conceived barely a day before the alleged attack.

Speaking to the Daily Nation, Ms Mwende said the attack might have had something to do with the fact that, a day earlier, she had been seen in public with the man she was having an affair with.

“We had sought accommodation in Machakos town because I did not want to bring him to my matrimonial bed,” she explained on Tuesday  at her new Masii home in Machakos.

“It was on the Saturday of July 23 and after spending time with the other man I went back home, where I lived alone because my husband had taken off three months earlier,” she said.

She told the paper that after the attack she found out that her husband, Stephen Ngila Nthenge, had asked her neighbours to spy on her.

“It was after the attack that I found out that my husband had asked my neighbours to spy on me. They were the ones who told him of my trip to Machakos with the man on the Saturday I conceived,” she said.

Refusing to disclose the identity of the lover, Ms Mwende clarified that there had not been any further contact with him as they had only agreed that he make her pregnant and they go their separate ways.

“I wanted a child. I was desperate and it is that yearning … and probably the devil too … that made me stray out of my marriage,” she said. “But I did it to save my marriage.”

“It was wrong to do it and I know people will judge me harshly for it,” she confessed, “but I am remorseful because I was desperate.

“Knowing that am alive today, and that I will be a mother soon, is the silver lining in the middle of all the heartache and gloom.”

Additional Reporting by the Daily Nation

Kisumu Son Snitches on His Conman Father, Calls Police on Him < Previous
Hilarious Meme Compilation (Thursday February 23) Next >
Recommended stories you may like: