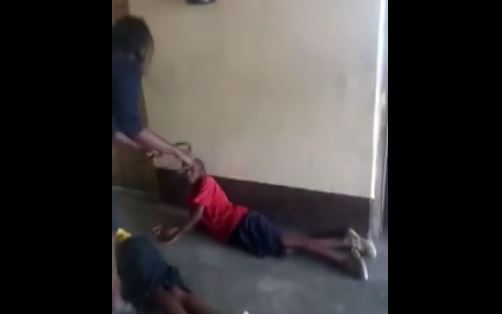 As a result, police in Tharaka Nithi County are investigating the teacher of Mwimbi Boarding Primary School who was filmed whipping pupils with a hose pipe.

At one point, the teacher is seen kicking one of the pupils as another teacher watches.

According to the school headteacher, Mr Mwangi Njeru, the incident happened on January 2, 2017, but the teacher who filmed it released to the social media on February 3.

He said he reported the matter to the County Director of Education and the school Board of Management (BoM).

Maara OCPD, Mr John Njihia, told media that the two accused and the head teacher had already recorded a statement and investigations are ongoing.

“We are going on with the investigations and we are hoping the two will soon be arraigned in court,” said Mr Njihia.

Dab of Shame: KOT Lash Out at President Uhuru for Dancing with FBI Crew < Previous
Hilarious Meme Compilation (Friday February 10) Next >
Recommended stories you may like: