I Was Not a Nobody. I Gave Raila a National Outlook and Campaign Money, Duale Hits Back 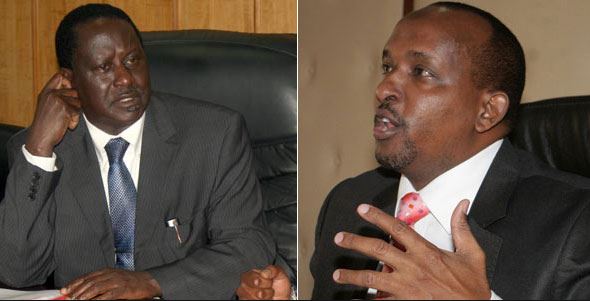 Garissa Town MP Aden Duale has responded to Raila Odinga’s claim that he was a nobody when he(Raila) introduced him to politics.

Raila Odinga made the claims on Thursday while addressing residents of Garissa. He said he picked the National Assembly Majority leader from Mombasa in 2007, when he was a “nobody”.

“I personally picked up Duale and took him to one of the Sheikhs and a group of renown elders in Garissa Town, and prevailed upon them to support him for the Dujis constituency parliamentary seat,” said Raila.

He added that Duale went on to win the seat on an ODM ticket and progressed to become who he is today.

“But unfortunately Duale, a political novice then, is now among those going around the country abusing and calling me all manner of names. I leave all this to God.”

But according to Aden Duale, he is the one who added the value to Raila Odinga and ODM.

“Picked me? From where? In 2007, it is I who delivered more than 10 MPs in North Eastern to ODM and heavily funded his [Raila’s] campaign,” Duale told The Star on phone.

“To the contrary, it is I who added value to Raila’s politics by giving him a national outlook; from a Luo leader to a national leader,” added the Majority leader.

Hilarious: Chipukeezy Parodies Senator Njoroge’s Gun Incident (VIDEO) < Previous
Dab of Shame: KOT Lash Out at President Uhuru for Dancing with FBI Crew Next >
Recommended stories you may like: