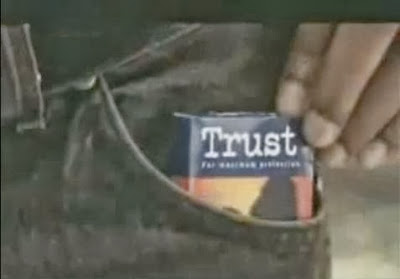 We’ve seen some really popular Kenyan YouTube videos. The one about some high school high jump in the rift valley has for instance garnered 3.9 million views. It actually hit 1 million views in just 5 days.

We also have a music video – We Found Love by Alisha Popat and American violinist Lindsey Stirling. At 17 million views, this is easily the most popular Kenyan YouTube video, but some people do not think it’s Kenyan enough.

But this one by Trust condom is undeniably 100% Kenyan.

It’s an old TV advert, that somehow sneaked online. It was actually released in 2004 or thereabout.
At 4.4 million views, this could as well be Kenya’s most viewed YouTube video.
It is titled ‘The Best Condom Advertisement’, but I think it should read ‘The Naughtiest’.
What do you think.

VIDEO – How Your Favourite Alejandro Soap is Made… Telemundo Studio Tour < Previous
PHOTOS – Machakos Governor Alfred Mutua’s HOT Wife Next >
Recommended stories you may like: