Kibaki Refuses To Answer Questions at UoN.. Not Even Jeff Koinange Could Crack Him 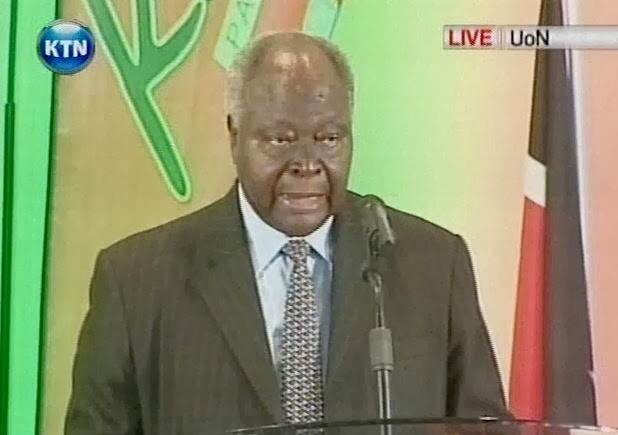 Yesterday, an otherwise good lecture by retired president Mwai Kibaki at the University of Nairobi Taifa hall was dampened by his somewhat rude refusal to answer questions.

President Kibaki’s lecture was part of the Kenya @ 50 celebrations, but the University plans on making it an annual affair.
The lecture, titled “Kenya @50: Of hindsight, Insight and Foresight, Reflections on the State of the Nation” looked back at our developments and history since independence. He talked of the financial sector, education, infrastructure and generally anything about Kenya. It lasted one hour sixteen minutes.

After that, it was expected, like is the norm world over after a public lecture, that Kibaki would take a few questions.
Sure enough, he sat down and was handed the mic, ready to listen to what Kenyans had to say.
By the way, Jeff Koinange was moderating.

A total of 12 questions were asked, but Kibaki answered only one. When Jeff gave him the chance to answer a particular question, he would smile, say nothing and nod. At one point, he refused to take the microphone even after Jeff requested the Culture secretary to give it to him.
The only question the former president answered was on the one thing he did as a young person, that imparted his adult life, and which he would like every young person to do.

His answer was actually quite twisted to say the least.

Among the questions he refused to answer are:
Whether we will be seeing his autobiography and if so when.
His thoughts on the media bill.
His regrets as president.
His take on the security situation in Turkana.
and his advice to the Jubilee government.

Though Jeff Koinange got to ask him only two questions, Kibaki proved to be his most difficult ‘guest’ yet, as he answered none.

PHOTOS – The Beautiful Shaniqua is The Face of Nairobi < Previous
How Machachari Actor Almasi Deals With People Calling Him GAY Next >
Recommended stories you may like: