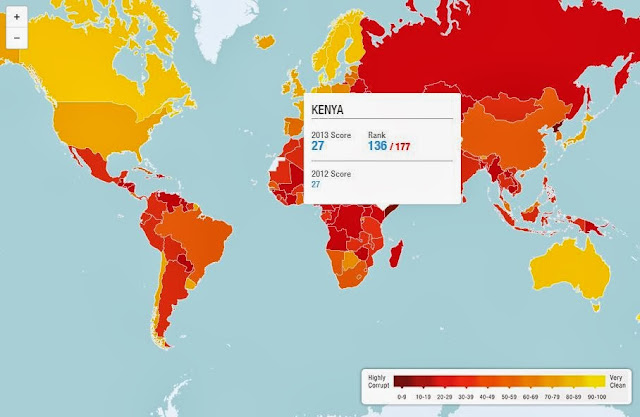 Transparency International has published its 2013 Corruption Perception Index (CPI), which ranks countries based on how corrupt their administrative and political institutions are perceived to be on a scale from 0 (highly corrupt) and a 100 (very clean).

CPI is the most widely used indicator of corruption worldwide.

Somalia is the most corrupt nation world wide, ranked at number 175. Sudan is the second in Africa, followed by surprisingly South Sudan.
Botswana on the other hand is the least corrupt country in Africa, ranked at number 30 globally. Kenya fairs badly, coming at position 136.
Here’s an interactive map of the ranking. Hover your cursor on any country to see it’s ranking.
© nairobiwire.com
Follow @nairobiwire
PHOTOS – President Kenyatta Breaks Ground For JKIA Greenfield Terminal < Previous
Westgate Photos Selected Among The Best Photos of 2013 By Reuters and TIME Next >
Recommended stories you may like: