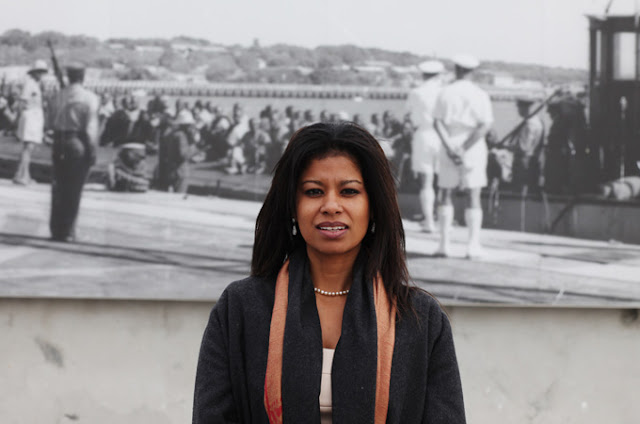 Sunday Live presenter Julie Gichuru last weekend wrote an open letter to ailing hero Nelson Mandela on her personal blog.
She also recounted a moment, while still a student, that she had the opportunity of meeting Mandela.

“He is in the conference hall right now and the plenary session is just about to end!”As the words of the smart middle aged lady echoed in the hushed hotel lobby my heart started to beat rapidly and I broke into a sweat. Suddenly I felt quite weak, just the thought of seeing him in person was too much for me to bear!I looked around and caught sight of an empty chair. Slowly but surely I walked towards it, trying not to let my feet give way completely. I am sure I sat quite gracefully belying the torment and stress my body was undergoing. I tried to breathe slowly… in and out, in and out, in and out… taking deep and deliberate breaths.“Take back control of your body Julie, take control!” I whispered to myself.

I should explain… It was the early nineties and I was in South Africa for a trade exhibition. My role was actually to help man an exhibition stall and sell curios and I was very happy to have this opportunity as a student, but suddenly everything had changed in a moment and this trip was turning out to be much more than I expected. Nelson Mandela was at our hotel and people were waiting to greet him as he left the conference venue. Ordinarily I am the type of person who would be at the front of that line, I am always at the front, but on this occasion my body, mind and soul were simply overwhelmed by the opportunity to meet Mandela – a chance to shake this great mans hand and look into his eyes. It was all too much for me and I needed time to pull myself together.

Now, the very first time I heard the name Mandela I was a young child. He was already serving time on Robben Island and South Africa was in the throes of the vicious apartheid era. I remember watching a horrifying news story on apartheid and asking my mother when South Africa would be free from such terror.“We are praying for it my love, but I don’t know if it will happen in our lifetime…” said Mum. Those words stayed with me…In 1977, when I was just 3 years old, anti aparthied activist Steve Biko was assassinated. In the late eighties his story captured in the move Cry Freedom touched many lives, including mine. In 1989 a schoolmate and I wrote a prize-winning play inspired by Biko and the struggle to end aparthied in South Africa, at the end of the play we lit candles and sang for the freedom heroes, a special moment captured in the picture above. In 1990 I sobbed with joy as Mandela walked to freedom. And now after keenly following his journey from afar I had a chance to meet a man I had watched, prayed for and admired practically all my life.

I pulled myself together roused by the commotion as the doors of the conference hall opened and people started to cheer. This was it, the moment that we would have a brief chance to say hello!Seated in the lobby, the conference doors to my left, I heard the sounds of excitement and jubilation getting louder. I stood up and stepped forward now calm, composed and very clear. I knew what I had to do. Resolute and focused I turned to my right and walked away. I never did get to meet Mandela.

Until today I had never asked myself why… what… how did I walk away as a greeting with one of my greatest hero’s and most inspirational figures was within my reach. And I have never doubted the decision I made that day. Looking back now I realize it is because in some philosophical way I believe I had already met Mandela – I knew him, I understood him, I followed his journey of struggle and pain and experienced the jubilation of his freedom.So, I would never look into his eyes and tell him what a source of inspiration and greatness he had been in my life…I would never stand by his side and express admiration for his strength and goodness…I would never shake his hand firmly, proud of his achievements as a great African icon…

I would never tell him how I sobbed when he was finally released… How that moment was one of the greatest in my life thus far…He would never know all these things… And that was ok…It was somehow unimportant and unnecessary, because everything I felt could not be captured in a moment or expressed in a sentence. The gifts that he has given Africa and the world cannot be rewarded by a moment of adulation but rather by a lifetime of example. His own life experience of struggle and sacrifice, determination and excellence, forgiveness and reconciliation can only be rewarded by us when we live our lives with a focus on building and growing a good society.

And so I understood deep inside that there was absolutely nothing I could do in that moment that would be worthy of his life and sacrifice and so I walked away, determined to simply try to live by his example. That would be honour and thanks enough for a man of such goodness and greatness.

As you sat on Robben Island and toiled, chipping into the yellow limestone of the quarry on that island prison, singing songs of fortitude and forgiveness – you may already have had the God given vision and understanding that you were building a great legacy for this continent – reminding us that we as Africans can indeed embody greatness, that we can indeed have good and selfless leaders, that we can rise above and beyond all expectations to achieve anything we seek to achieve. You were giving a wounded continent her dignity.

We love you. You have shown us courage, intelligence, wisdom, goodness, greatness and excellence. The greatest gift we can give you in return is to take your example and seek to rise above all our worst circumstances – to reject hate and division and embrace determination, resilience and forgiveness. Because of your example we can and must dream great dreams, and beyond all expectations work towards achieving those dreams for our continent, for humanity and for the greater good.

Thank you Baba, thank you.