Aden Duale To Sue For Being Likened To A Pig

House Majority Leader Aden Duale is planning to sue the organisers of Tuesday’s #OCCUPY PARLIAMENT demonstrations, where pigs feasting on blood were symbolically used to show the MPs greed.

Duale is angry that one of the pigs (the biggest), was branded his name, together with two other MPs, Mithika Linturi and Jakoyo Midiwo. The three are seen as the biggest and most vocal supporters of the proposal to disband the Salaries and Remuneration Commission. 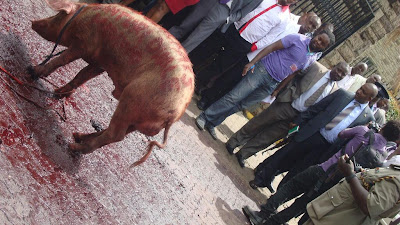 The Garissa Township legislator is a devout Muslim, where any association with pigs is considered unholy.

“I am planning to sue these fellows who branded me a pig, this is a big issue in my constituency right now,” he said in parliament.
He added that it was wrong for the activists to tarnish the name of a practicing Muslim, so that they can prove a point.
“This is an insult and an affront to my religious liberty by associating me with an animal that my religion prohibits,” he said.

Mother-In-Law Actress Beth Mbaya (Wanade) To Be Laid To Rest Today < Previous
Photos – Jubilee Cabinet And Their Families Next >
Recommended stories you may like:
Online Games That Are Easy to Play
How to Play HollywoodBets and Earn Money
Email Marketing in 2021: Is It Still Effective?
Olive Burrows: Kirubi Said He Doesn’t Hire Fat People