A Frog’s Eye View of Life in Nairobi 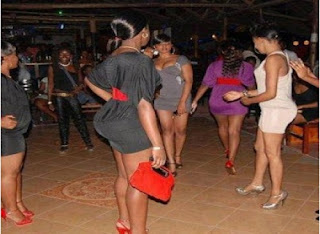 The gorgeous females stroll across the city streets in figure-hugging jeans, bums bopping to some slow rhythm, as their tiny tops, and welcoming micro-minis expose pert cleavages.
The Peculiar Kenyan
Older women shoot disapproving stares. As lusty masculine eyes follow their every move in voyeuristic anonymity.
Walking in pairs or groups, they giggle and make fun of other ladies who do not conform to their fashion sense.

In the city’s vibrant nightclubs, notably the notorious, “Electric Avenue” in Nairobi’s Westlands district, near-naked gals are dancing seductively outside a club, two chicks are smooching while fondling each other’s boobs, another’s bare derriere peeps out of a sexy micro-mini, as some dude at the parking lot nearby bumps and grinds a lap top (small-bodied gal) in his car.
These scenes are increasingly becoming the main identifiers for the sexually-liberated Nairobi gal.
East and Central Africa’s commercial capital, Nairobi, is a place of peculiar contradictions. We are a deeply conservative society of “born again” Christians who are supposed to be living a rather Puritanical lifestyle. But in this country of hardworking people, and well-educated women, a natural mystic is stirring up something that’s left most people baffled.

The empowered woman has brushed aside the conservative’s narrow way of thinking and she’s now busy shaping her world in her own image. Sending detractors in a huff as the hypocritical mainstream media concocts images of hell and damnation against the so-called “hook-up culture”.
These days it’s not unusual to see gorgeous and educated girls getting into one-night stands with strangers and women are boldly doing the picking. This Russian roulette game now has names like Chips funga, (take away potato fries and chicken popular as a late night snack) — when a guy picks a girl, and sausage funga, (takeaway sausage) — if it’s a woman picking up a guy.
While the conservative old men are busy “evangelising” against this new “sin”, they also can’t take their eyes off the panoramic view of nature’s gift which seems to sprout like flowers on every street corner. Under the cover of darkness they prowl like leopards.

They know these young girls exist only in their immediate world. They will seduce these pretty young things and in between sips of Jameson and J&B rare, let their wallets do the talking while jacking up the young gals on tequila and black ice.
So it should not surprise a visitor to this bustling city when a gorgeous young girl, ripe as a fresh tomato, shrieks in glee as her man enters the club. “Hi, babie!” she shouts as she runs straight into the arms of a wrinkled old man with grey hairs. Dating your ancestors is accepted here.

But this open rebellion against social norms is among others being fuelled by a serious viral infection affecting Nairobi gals called money fever. A strange disease indeed, but when you understand a rich man is a handsome man. . . you get the drift why its cure is a “handsome” man from any age group.
It’s why I was astounded some months back by the national outcry when a young entrepreneur set up a Facebook page: “Campus Divas for Rich men” (FB brought down the page). But tens of copy cat pages abound. The young entrepreneur noticed beautiful, educated, but dumb girls were “willing” to do anything to touch wealth, and the demand from loaded men was overwhelming.
Let’s not blame these poor guys; they are simply overwhelmed. Nairobi gals prefer guys in steady relationships, married men or single and loaded. It’s why the men in this demographic seem like kids in a candy shop.
Real love is becoming a rare commodity. Divorce rates are high among the young and educated. These days there’s no romance and most men are not willing to go the romance way because they say the typical Nairobi gal is a slut. A slut is a woman who behaves like a man.
When these young ladies look up to their role models, the professional woman making waves in the media and industry, they find she’s a serial bed-hopper. Busy in an adulterous world called mpango wa kando (married men and women with a side dish).

Recently an advert showing a married woman being advised by fellow women to use a condom with her mpango — while her husband is on a trip — has caused a storm. The hypocrites that masquerade as church leaders are coming out from their rabbit holes and into our living room screens shouting against condom use. Ironically, The HIV infection rate among married couples, rich men and gals is way above the national average. The government is seriously worried.
Now, men are idiots. With the rise of the new middle class, these newly minted idiots have been busy causing inflation in the dating markets in their quest to validate their new found virility and masculinity. They now use money as a tool to hook up with women which has seen ordinary blokes with modest means pushed out of the “market”.

Once a lady sexually submits to this idiot because she likes/loves him, the idiot then dips into his pockets and hands out something like Kshs 10 000 in the morning.
This woman now defines success by the designer labels on the clothes she wears, the car she drives, her picket fence neighbourhood, the company she keeps, and whatever they do as part of that company.
Let’s cut some flak for the Nairobi man. Society has consistently ignored the boy-child for decades as it concentrated on the girl-child. Now the new man is turning out to be an irresponsible oaf. Although I also think that the problem with today’s kids is that their parents are idiots too.

No one has taken the burden of mentoring young men. Instead society whispers in their ears that they are now “men” , that they got to learn, and yet no one is there to teach them how to be men. A woman can’t teach a boy to be a man, equally, how do we expect a man who was not taught, to teach his son. Now these young wounded lions are turning into beasts; killers, wife batterers, absentee fathers, criminals for hire, hopeless drunkards . . . In fact for this majority group, alcohol is their girlfriend.
Unless this boy-child is restored back to his place in society, we are at the tipping point.

Today, this new man is interested in instant sex and disappears the moment a woman says she needs some cash to buy something.
These young lions have nothing to lose; they have no money and spend their days at jobless corners in the teeming housing estates. People say they are lazy, man is naturally programmed to be lazy, but he’s much happier when kept busy.
The young lions fondle cheap alcohol, kiss drugs, and flirt with crime. Drugs are sold in every street corner.
We have become an instant coffee generation. People no longer want to wait patiently to get the fruits of their hard labour. Everyone is trying to take a short cut. Patience is no longer a virtue. Young men too are becoming gigolos and hunting for the ever-increasing sugar mummies.

But this sad state of affairs in this wonderfully peculiar nation has got deep roots. Some 50 years ago we got our “independence”. But the first president, Jomo Kenyatta — a rapacious land grabber — set off a chain of events when he acquired fabulous wealth in a rather short time. His tribal cronies also got to dip their dirty fingers into the national wealth at the expense of majority of Kenyans including the Mau Mau freedom fighters.

When he passed away on in 1978, the baton went to a born-again Christian called, Daniel Moi, who followed his nyayo (footsteps) and soon became the high priest of kleptocracy and looting of the country’s resources.
In 2002, our “messiah” Mwai Kibaki came to power in a ballot revolution that united this country into a nation. We were the world’s most optimistic people according to an international poll. But Kibaki turned out to be a hopeless tribalist, and his government became the most corrupt in our history. In spite of this, the economy still took off to miraculous heights. It is why I love our tourism slogan — Magical Kenya.

During Kibaki’s presidency, the decades of corruption, tribalism, and the endemic lack of leadership and moral values came into full bloom. His economic revival which focused on a trickle-down economic theory that helps the rich get richer and blames the poor for their own travails set us off on dangerous grounds. It’s when people see others making easy money while they can’t make a decent shilling that has driven many into acts of desperation.
Ostentatious wealth rubs shoulders with shameless poverty. One day a guy is dead broke, the next, through political or tribal connections he’s a millionaire. Billionaires are popping up everywhere either through entrepreneurial zeal or corruption. Half of the country’s budget is lost through corruption. Most men and increasingly women, are slowly equating the Kenyan dream to short cuts to fabulous wealth through corruption and sexual vice. We only care about making money, yet it doesn’t have a soul. In fact, free money is paid back in blood. It has the power to divide families, marriages and societies.

In recent elections we voted for “change” and chose drug dealers, fraudsters, conmen, and petty thieves as our leaders. We have a new President and his deputy who “won” in a funked election. Now we have broken the record books. Kenya is the first country in the world to elect suspects facing charges of crimes against humanity at the International Criminal Court. This is in regards to their alleged role in funding murderous militias during the 2008 post-election violence.

On an ongoing tour in London, our national shame was broadcast to the world in a screaming headline by the Daily Telegraph: Kenya: ‘Criminal’ President Invited to UK. It’s in these times that being a Kenyan is a shame and it depicts the depths of rot in our society.

Loading...
Ringtone: Started From The Bottom Now I’m Here < Previous
Photos of Fred Omondi’s Mazda RX-7 Convertible Next >
Recommended stories you may like:

How Denial Can Make Addiction Worse and Why Therapy Can Help