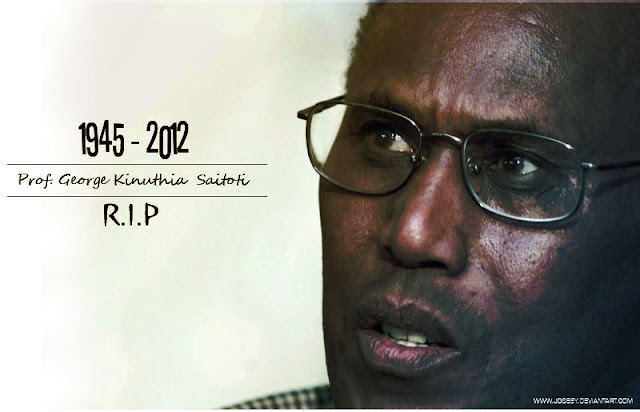 The two journalists looked into the circumstances that led to the death of Prof. Saitoti, his assistant Orwa Ojode, their bodyguards and two pilots. The pair tried to prove that Saitoti’s ‘accident’ was an indeed an assassination.

Mohammed Ali started by revealing his trials and tribulations after his last exposé.
He narrated how a special police force code name ‘EAGLE 1’ was formed to neutralize specific journalists. Leading this exercise were three officers; Maina, Muthee and Kariuki.
Mohammed Ali was to be killed along Waiyaki Way, near the Museum Hill Interchange.
Dennis Onsarigo, his colleague was to be terminated as he headed home.

To support his claims, Moha played a clip of the then Makadara MP Mike Sonko addressing residents of Likoni in May last year. Sonko said that he was aware of a plot to kill Mohammed Ali, Maina Njenga and himself. The legislator would soon record a statement with the police.
According to Moha and Namu, the police or those out to hide the truth came up with an elaborate plan to divert attention from the ‘Paruwanja la Mihadarati’ story, and that’s how we had the Moi Avenue explosion.

Soon after, there were reports on social media that Mohammed Ali had died. This story was carried by various print and online media as one of the many death hoaxes involving celebrities.
The investigative reporter however has another theory. According to him, the rumour was started by NSIS to see the reactions of Kenyans. He said that the spy organization was testing the waters.

Soon, Moha was arrested and charged for phone theft. This, he says was done with the intention of putting him behind bars for at least 3 years. According to him, a Mr. Abdirahman Omar at Central Police Station was leading the exercise.
A few weeks later Moha and Onsarigo fled to Norway, and the Standard Group wrote to CID director Ndegwa Muhoro to investigate their plight.
Fast forward to Friday June 8th 2012. All members of parliament had converged at the Continental hotel, Mombasa for the Forum on Peaceful Elections.
It is in this conference that Saitoti gave his last public address, one that the MPs thought was unnecessarily long.
At the hotel, Saitoti had been allocated room 213 but did not spend the night there. Instead, he opted for the Serena Mombasa Beach Hotel. At Continental’s room 213, Saitoti left one of his bodyguards, who slept there.
His assistant Orwa Ojode however spent in his allocated room 234. Before retiring to bed, he was in the company of Eugene Wamalwa, Musikari Kombo and two other individuals. The next day however, the assistant minister left his official car and aides behind, and took a taxi to the Moi International Airport.
That Sunday, Ojode would host Saitoti in his constituency Ndhiwa, for a church fundraiser. The two were to depart from Wilson Airport and by 8 am, Saitoti was already at the airport’s VIP lounge. Before his assistant arrived, the minister was meeting US assistant secretary of state for African affairs Johnnie Carson. Allegedly, the diplomat urged Saitoti to name the drug barons without fear, and America would consider backing him for the presidency.
After the short meeting, Ojode arrived and the two departed for Ndhiwa, only to crash a few minutes later.
In the flight recording aired on Jicho Pevu, the pilots were heard coughing repeatedly just before silence and crashing. They did not even press the distress button.
In the investigative piece, it emerged that the pilots that were to fly Saitoti initially, were replaced with other quite inexperience ones. In fact, Nancy Gituanja and Luke Oyugi were informed of their morning assignment that past night while at a club near the airport.
When the plane crashed, Mohammed Ali wondered why the police failed to seal off the scene to prevent loss of evidence. He also wonders why the plane wreckage was let to remain at the scene for 14 full days.
Moha and Namu took a flight to Johannesburg, particularly to Eurocopter’s offices. There, nobody was ready to talk to them. They then went to a hospital in the city, where one of the doctors involved in the postmortem worked. His response was that he did not want to get involved in a foreign government.
A few moths later, Saitoti’s phone was recovered with an Administration Police officer. From records obtained by the reporters, the officer was in constant communication with one particular number. It was therefore not surprising that the police lied about the officer’s base. While they said he was from Machakos, Mohammed Ali confirmed otherwise.
As this was happening, NSIS had tapped phones belonging to victims’ families, doctors and specific journalists.
Soon after, the commission investigating the accident, led by judge Kalpana Rawal, was informed how NSIS made phone calls, to prevent the inclusion of particular evidence.
In the postmortem, there was decolourisation of the body, and a particular jelly-pink colour was observed in some organs. These two factors are brought about by poisonous gas cyanide, and these two facts were not included in the final report. This was admitted by Dr. Amripal karsi.
The commission also heard how some unidentified white men ‘repaired’ the helicopter one day before the accident.
In the end, the commission determined that human error was to blame. The chairperson, Kalpana Rawal will be sworn in as the Deputy Chief Justice soon.

Kenyans Reactions After Ciku Muiruri Is Busted With Artur Margaryan < Previous
Ciku Muiruri Busted – Now The Memes Keep on Coming Next >
Recommended stories you may like: