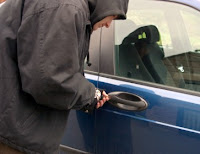 This is from someone who almost lost his valuables to a sophisticated team of thieves, entering cars without necessarily breaking into them.

BEWARE!!!! CAR THIEVES GONE DIGITAL!!!!
“I locked my car. As I walked away I heard my car door unlock”.
I went back and locked my car again three times.
Each time, as soon as I started to walk away, I could hear it unlock again!! Naturally alarmed, I looked around and there were two men sitting in a car next to the Store. They were obviously watching me intently and there seemed no doubt they were somehow involved in this very weird situation. I quickly abandoned my errand, jumped into my car and sped away.


I went straight to the police station, told them what had happened, and found out I was part of a new, and very successful scheme being used to gain entry into parked cars. Two weeks later, my friend’s son had a similar experience….W ­hile traveling, he stopped at a motorway service area to use the toilet.
When he came out to his car less than 5 minutes later, someone had managed to get into his car and had stolen his mobile phone, laptop computer, sat-nav, briefcase and other belongings.
He called the police and since there were no signs of his car having been broken into, the police told him he had probably been a victim of the latest robbery tactic – there is a device that robbers are using now to clone your security code when you lock your doors on your car using your remote locking device.
They sit a distance away and watch for their next victim. They know you are going inside the Store, restaurant, or whatever and that they now have a few minutes to steal and run.

The police officer said always to lock your car manually with the key when parking in a public area. That way if there is someone
sitting in a car nearby watching for their next victim, it will not be you. When you lock up with the key upon exiting, it does not send the security code, but if you walk away and use the remote button, it sends the code through the airwaves where it can be easily intercepted by the device.
This is very real. Beware of what you just read and please pass this information on. Look how many times we all lock our doors
with our remote just to be sure we remembered to lock them — and bingo, someone has our code…and potentially
whatever is in our car.”
Please share with everyone you know in the hope that we can frustrate these thieves

Shaffie Weru Almost Drops Trousers on Stage.. Will He Keep Them On At Big Brother?? (Photos) < Previous
Look At The Message on Shaffie Weru’s T Shirt – Unbelievable Next >
Recommended stories you may like: