Kimunya Calls His Constituents ‘Thankless’ For Voting Him Out 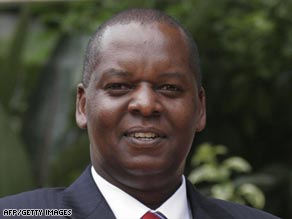 Immediate former transport minister Amos Kimunya, who has just lost his Kipipiri seat, has written to his constituents calling them a thankless lot. Kimunya has been the Kipipiri MP for 10 years before losing to Nairobi lawyer Samuel Kamunye Gichigi in the just concluded elections.
Kimunya had initially been awarded the TNA nomination controversially, but Gichigi managed to secure the APK nomination.
The lawyer then won the election with 18,972 votes against Mr Kimunya’s 16,689.


In an unprecedented move, Kimunya, in a letter submitted to the returning officer, accused his constituents as unappreciative. He said that his development record spoke for itself, but thankless constituents still voted him out.
The letter read in part: “I am very disappointed that the people of Kipipiri did not appreciate my development record.”

The letter completely disregarded the the 16,000+ who voted for him.

Safaricom Explains Why They Are Not To Blame For Delayed Election Results Transmission < Previous
Janet Mbugua’s Passionate Plea – MUST READ Next >
Recommended stories you may like: