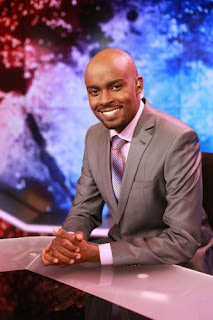 Mark Masai has made his way back to NTV after resigning from CCTV. He confirmed this on his twitter account, where he wrote, “First day back at NTV and I feel welcomed by the @ntvkenya team. Thank you,@CCTVAfrica for your blessings in this new path. God-speed.”

This marks a big plus for the station that has had to watch most of its top anchors leave for Mombasa Road based rival Standard Group.
In the past few months, NMG has lost:John Allan Namu, James Smart, Linda Ogutu, Mohammed Ali, Joe Ageyo among many other journalists to KTN. This was just after the CCTV wave that had swept top talents from Kenya media houses. Mark Masai was among them, as was Robert Nagila and Beatrice Marshall and Terryanne Chebet.
NTV has however picked itself up and moved on, with the first sign being the return of Larry Madowo from CNBC Africa in December last year. Larry has since taken over James Smart’s The Trend.
On Tuesday, NTV journalists were at hand to give Mark a warm welcome back.

@MarkMasai becomes the second anchor to leave an international station to return to @ntvkenya in as many months. You’ll see why soon  -Larry Madowo

@MarkMasai Welcome back to the team bro..great to have u back #DreamTeam taking shape..  – Ben Kitili

Welcome back to the #NTV newsroom my dear @MarkMasai – missed you!  – Smriti Vidyarthi

Gangnam Style Earns $8 Million On YouTube < Previous
No More Mini Skirts For Kenyan Lawyers Next >
Recommended stories you may like: