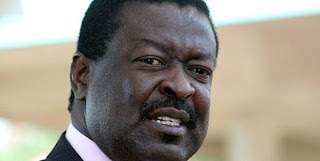 When he left ODM, his path to the presidency was well laid out. He was to be the compromise candidate, in case Uhuru and Ruto were prevented from running for the presidency. Mutahi Ngunyi advanced this theory and it soon became widely accepted. As months progressed, it was becoming more unlikely that UhuRuto would drop their candidacy for either Mudavadi or Kalonzo. The Hague suspects looked determined to be on the ballot, and Mudavadi stopped hoping. He started campaigning as himself, but did not sell, at least according to the opinion polls.

When the court case everyone had been waiting for, against Uhuru and Ruto was withdrawn, Mudavadi’s hope for an endorsement probably sank to an all time low. The two then went ahead and launched their ticket at a public rally at Afraha Stadium. ‘Messi’ as Mudavadi had been calling himself, was left with nothing to do, but to come up with a formidable team that would emerge number 3. He almost teamed up with Peter Kenneth, but the Gatanga legislator dodged this bullet as he would have ended up tarnishing his reform credentials. ‘Ma DVD’ was now twice rejected, first by UhuRuto and now by Peter Kenneth. As fate would have it, Uhuru and Ruto drove to Mudavadi’s home in Riverside, that same day, and came to the ‘rescue’ of the DPM. Uhuru agreed to step down and support Mudavadi. Naively, Mudavadi took this bait and signed some useless papers stating that indeed Uhuru would step down. Their lawyers kept copies. The same day, Mudavadi and UhuRuto then signed the legally recognized document with nowhere stating that Uhuru would step down, and deposited it at the registrar of parties. Nowhere in the deposited agreement does Uhuru talk of stepping down, and nowhere is the previous agreement made reference to.
All this while, it did not strike the DPM that he was dealing with someone who had invested billions in his candidature, including spending Sh 150 million during the launch of TNA alone.

Read: How Kenyans Bashed Mudavadi For His Political Naivety

For the first few days, it was all systems go. Everything was going according to plan, until Shebesh and co. stated on TV that their support for Uhuru was ‘untransferable’. The Sabatia legislator at this point probably realized that he had not been playing any ball, Uhuru had. It was all choreographed; the signing, the ‘tutaenda bodo’, the rejection… everything. Then came the call for delegates. And it hit him. He had been played.

As things stand, TNA and URP are not ready to have a candidate by consensus, and if the three meet in the same room, the only consensus they will have is to walk out of the room. Otherwise, if majority wins, Uhuru and Ruto will decide it’s the delegates system.
At Kasarani, Mudavadi’s only competition will be Charity Ngilu. Uhuru Kenyatta will be a distant first. This is partly owing to URP support and TNA’s numerical advantage in terms of delegates. Ma DVD will then settle for the majority leader’s position.

At this point, his colourless political career will come to a sudden end. In 2002, he failed to defend his member of parliament seat, and next year history may repeat itself. Former chairman of the Centre for Multiparty Democracy Prof Larry Gumbe, sums it by saying, “If Mudavadi does not get the presidential ticket in Jubilee, the best for him would be to resign from politics and explore other interests,”
And so we ask, Should Musalia Mudavadi quit politics?

Girlfriend Gives House Direction To Boyfriend (Hilarious) < Previous
Opinion Poll: Sonko Will Win Nairobi Senator Seat With A Landslide Next >
Recommended stories you may like: