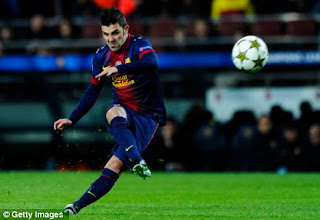 Arsenal have been quoted £16million for Barcelona striker David Villa. We revealed manager Arsene Wenger’s interest in the 31-year-old on Saturday.And Gunners officials have been told it will take €20million to land Spain’s record goalscorer.
Arsene Wenger would prefer a short-term loan for the former Valencia star, who is also a target for Chelsea, but is willing to offer a permanent move if the price is right.

However, the fee quoted by Barca is likely to be deemed too much by Arsenal because of Villa’s age. Despite the fact he is a peripheral figure for Barcelona, the Spanish giants are not desperate to sell Villa next month.They are more open to offloading him in the summer, by which time Wenger is likely to have alternative targets.
Arsenal may face a fight for the striker, however, with Chelsea also believed to be in for Villa. Chelsea’s Spanish midfielder Oriol Romeu would be delighted if his fellow Spaniard did make the switch to Stamford Bridge.

‘I don’t know that Villa’s situation is, but if a great player like him comes, the record goalscorer with the national team, he would be welcomed and we would be happy,’ said Romeu, quoted as telling Spanish radio show Esports Cope.
But Barca midfielder Andres Iniesta hopes Villa stays put, telling reporters today: ‘I don’t know if there’s a chance (he could leave), I don’t think so, although for me personally I wouldn’t like it if he did, because Villa is a vital player.’
Sportsmail

Sunday Nation Caught Photoshopping Ruto onto CORD Rally… Then Apologizes < Previous
Manchester United To Sign Dortmund’s Lewandowski This January Next >
Recommended stories you may like: