Raila: Kenya Can Host Olympics In 2024

By Ken   /   Thursday, 09 Aug 2012 12:12PM   /   Leave a Comment
The Prime Minister Raila Odinga must be having a tonne of confidence in Kenya’s future. The ODM Presidential aspirant was recently interviewed on BBC’s show – Focus on Africa where he made a bold statement that has now started stirring controversy.
Raila claimed that Kenya is in a position to host the 33rd Olympic Games in 2024. 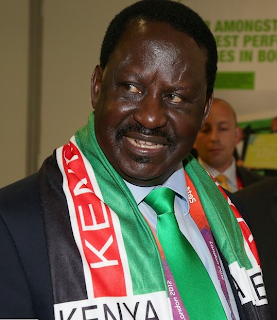 He said that come 2024, Kenya will make a bid to host the Olympic games. Agwambo as he is candidly referred to by his fans stated with confidence that the country has the capacity to host over 100 countries successfully.
However most people did not share his sentiments and thrashed at him on Twitter. They wondered why the Prime minister was saying that knowing clearly how hard it is to host small matches and games.
One tweet read, “We need to be able to hold a Gor Mahia vs AFC Leopard’s game successfully before we can think of hosting the Olympics”
Another tweet read, “Watalala wapi? Are you serious?”
@mugaka, “Raila , Man you are a joker, Complete building Mombasa Road first!”
@AnitaK, “this is a populist statement! stop lying! hatujafika iyo level!”

How To Spot A Kenyan. [ Hilarious Collection ] < Previous
King Rudisha Wins Gold And Sets New World Record Next >
Recommended stories you may like: