Al Shabab: We Killed 73 KDF And Lost 3, Not Vice Versa 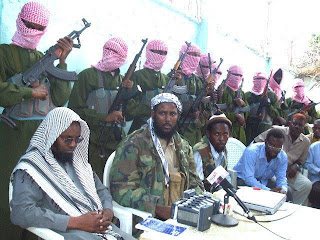 Yesterday, we were greeted with news that a good number of Al Shabaab fighters had been killed by KDF. It was reported that 73 Al Shabaab  and 3 KDF soldiers had died after the biggest battle yet. It was said that Al Shabab ambushed KDF’s camp but the latter had been tipped of their coming and were ready for them.
Now, as is custom with Al Shabaab, they have downplayed the whole incident and said that it was in fact KDF who lost 73 soldiers while they only lost 3. They accuse the Kenyans of distorting the facts and hiding the truth.
This is a message posted on one of propaganda website.

Martyrs will never be defeated because they know they are defending their territory against coward invaders who are still encroaching Along the borders. The so called KDF-KENYA dead forces are coward who know what the war is but deaf about how the war is. This is not the end, look at those United Snakes of America, what have they gained so far for invading Afganistan and Iraq? Just dead bodies going back home. And what happened to Ugandan soldiers recently on Mt. Kenya? In the name of reinforcing AMISOM, they got what they deserved. Not yet over, they will see hell on earth. INSHAALLAH, those who really fight in the cause of ALLAH SW, ALLAH SW is surely with them. Pray to ALLAH SW to be alive to see that Islam will rule the world.

© nairobiwire.com
Robert Alai: Government Spokesman Alfred Mutua Wants To Kill Me < Previous
Octopizzo Going Back To School, In USA Next >
Recommended stories you may like: