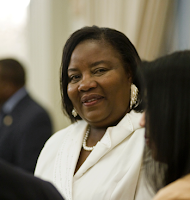 Miguna Miguna’s book is out and so are jokes about him. Some stories from the book were not covered by Nation newspaper when it serialized the book. Here is one of them. It talks about Ida Odinga’s attitude. Miguna claims that Raila’s wife is rude and arrogant. We had recently told you how she ejected Sally Kosgei from a Kisumu ferry. Now there is this incident where Ida … Just read it yourself.

Or take the case of Raila’s long-suffering photographer Dominick Otieno. Dominic worked for Raila for more than 15 years. On numerous occasions before Raila became Prime Minister, Dominick would go for months without pay. He relied on well-wishers to help him out whenever they could. I did so myself on many different occasions. After Raila became Prime Minister, it took Dominick nearly one year before he was given some little contract paying him peanuts. But as a focused and dedicated worker, Dominick saved some money and constructed for himself a small semi-permanent house in his village in Ugenya.
When Raila and Ida were on a tour of Ugenya, someone in their entourage pointed out Dominick’s small house to both of them, thinking that the two would be proud of their hard-working photographer. Later, as the entourage reached Ugunja market where Dominick had gone as part of an advance party to welcome the Prime Minister and take photographs from vantage positions, Ida approached him and within full view of the entourage, berated him, asking rudely: “Dominick, where did you get money to build a house?” Dominick was both stunned and confused. He didn’t know what Ida was talking about. He didn’t consider his small semi-permanent structure in the village to be a “house” that might put Ida’s nose out of joint.

© nairobiwire.com
Couple Found Counting Big Bundles of Money Stolen From Chase Bank. < Previous
How Safaricom Is Stealing Your Data Bundles. Next >
Recommended stories you may like: