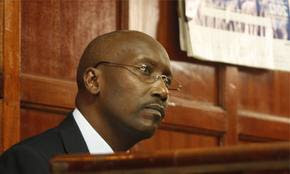 Estranged wife of former president Moi’s son, Philip Moi told the court yesterday that her ex-husband is a man of means who owned several estates and bank accounts.

“Mr. Moi is financially sound contrary to his claim that he was unable to pay his debts,” Ms Rossana Pluda said through lawyer Judy Thongori.

The two had been given a week by the High Court to resolve their differences outside court failure to which the court shall take charge however the two had failed to reach a decision.

Pluda is now contesting an application filed by Mr. Moi who is calling on the court to declare him bankrupt. Two weeks ago Mr. Moi had claimed that he is broke and only depends on his friends for survival. Now he wants to be declared bankrupt and therefore unable to pay Ms Pluda, sh 7million lump sum and sh250, 000 per month for her upkeep.

Ms Thongori told the court that Mr. Moi recently bought a new luxurious television set worth sh 750,000 and installed a Jacuzzi in his Muthaiga house worth sh 300,000.
“Surely that kind of spending is not for someone who is filing for bankruptcy,’’ she told Court judge Joseph Mutava.

Mr. Moi’s lawyer Alloys Kwengu dismissed those claims asking them to present evidences of their claims.

The ruling will be on September 25th.
d-post
Caroline Mutoko And Mwalimu King’ang’i Get Big Tourism Jobs. < Previous
Ferdinand Waititu Conned Sh 500,000 Next >
Recommended stories you may like: