As opposed to 2007 elections, 2013 elections are being held during a period when Kenyans are the 2nd most tweeting nation in Africa. In President Kibaki’s own words, the number of Facebook users is fast approaching 2 million. The significance of this is the proof that millions of Kenyans are getting online. By CCK’s stats, more than 10 million Kenyans access the internet, majority of these through their mobile phones.
In a political language, the numbers are not that significant considering the fact that a good number of those are school going children with no voters card. However, considering the influence those accessing the net regularly may have on those less privileged, plus the beautiful growth rate of internet penetration into the masses, politicians have dedicated lots of resources to ensure their online presence is felt.
All presidential candidates have a decent number of fans and followers on the two main social networking sites, Facebook and Twitter. In fact, excluding media houses and celebrities, they are the most liked and followed Kenyans on Facebook and Twitter respectively.
Apart from their social media presence, the main presidential candidates have official campaign websites. We will analyze some of them here and rank them from the worst.
#7. Kalonzo Musyoka
The VP is a late comer in the internet world, going by his social media followers. He has one of the least number of followers compared to other candidates. His official website says it all. Its still under construction.
Kalonzo.co.ke just displays a blue background with a wiper logo. However he has another website, which is clearly not his official campaign website. www.mykalonzomusyoka.com updates his every move mainly as a VP. Hopefully his campaign site will be ready soon.
#6. William Ruto 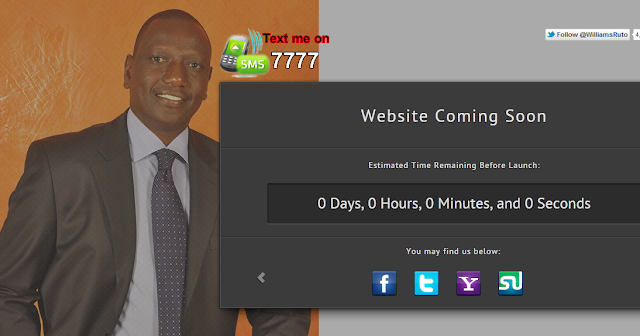 Just like his wiper friend, Ruto’s campaign website (www.williamsamoeiruto.co.ke) is not ready. All it displays is a timer (not working), a coming soon message and some social media icons. The reason Ruto’s site comes before Kalonzo’s is the fact that though both are still under construction, Ruto’s allows social media engagement pre launch. However it’s still a pity that he does not have a functional website till now.
#5. Raphael Tuju
The Party of Action presidential candidate has not been left behind. His official campaign website is www.raphaeltuju.com. It would have been better if he had settled for a .co.ke domain name. His website is to say the least ugly. Whether it is PoA’s colours or the overall design, I don’t know. Social media has however been cleverly integrated. One stand out feature is the livestream button. It is meant to broadcast Tuju’s events live, but I must admit, I’ve not seen it work. As is the norm these days, a donate button features high on the site. 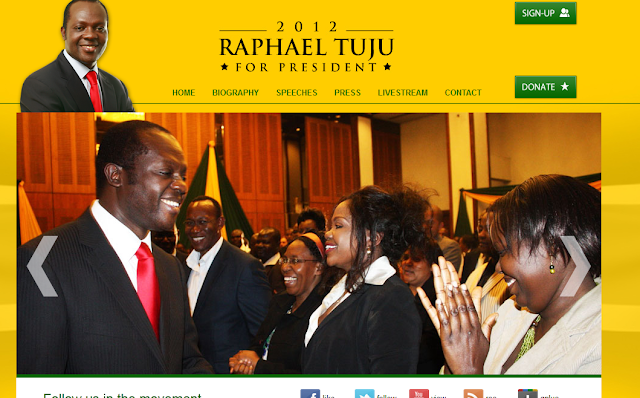 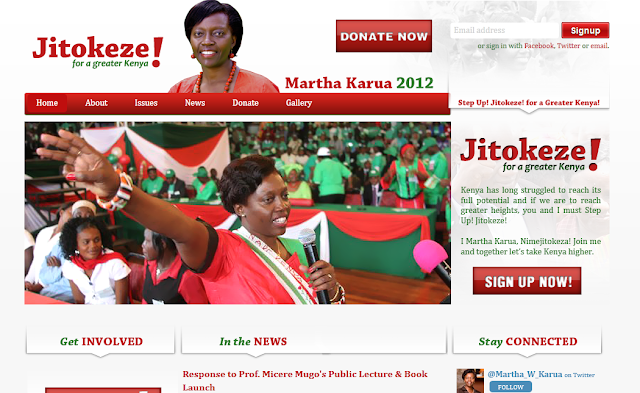 She is one of the candidates who embraced the internet very early. This is supported by the followers she has on social media. For a long time she had held the position of the most followed politician on Twitter.
Her campaign website, www.joinmarthakarua.com is average looking. It is filled with so much, which is not always a good thing. Donate button is also present and so is a volunteer button. Social media buttons are present but not well integrated. A lot more can be done to the site, including a whole redesign.
#3. Raila Odinga
He may be the most popular candidate (as per opinion polls) but he does not have the best campaign website. www.railaforpresident2012.com does not have any eye catching feature. At least social media is well integrated. As opposed to other candidates, Raila’s website does not provide any info about the man. One thing that gives it a minus is the Kigeugeu music playing in the background when you open the site. It may be his favourite song but who puts auto playing music in website backgrounds this days. Raila has also gone an extra mile in asking for your donations. The first thing you encounter when you open the site is a pop up asking you how much you want to donate today. 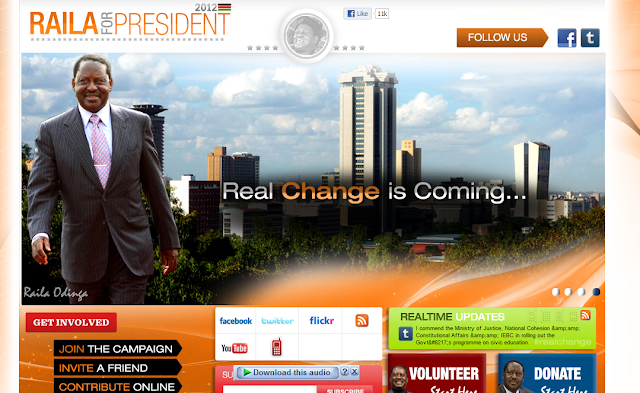 #2. Uhuru Kenyatta.
Many will claim that Uhuru’s website (www.uhuru.co.ke) should be at number one, but lets face it, it has nothing striking apart from scrollable images showing his life story. Taking nothing from it however, the website is amazing. It clearly captures his entire life in detail. It also has a not so good social media integration. There is also a parallel website campaigning for Uhuru with the domain, www.teamuhuru.co.ke. This is one heck of an interactive website with social media integrated to the core. It is a community driven website that provides constant content.
#1. Peter Kenneth 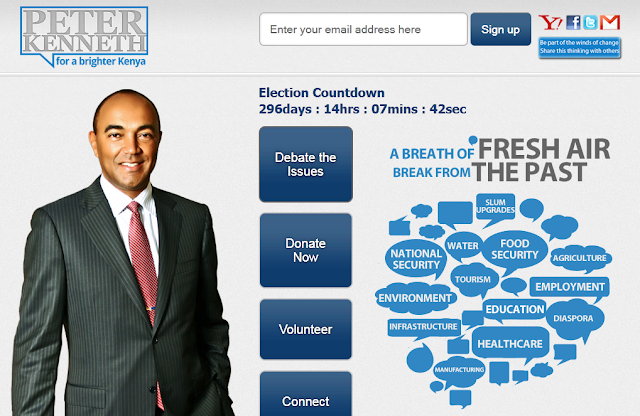 He may not be doing so well on opinion polls but he has outdone himself on the online scene. His website, www.peterkenneth.com has everything the others have, plus a few extra. What’s striking however is the manner in which they are organized. There is a ‘debate the issues’ section which provides his take on issues of national importance , while also allowing you to add your views. Connect section provides live feeds from @Peter_Kenneth. You can even sign up as a volunteer without leaving the homepage. His social media integration is good, but the site layout carries the day.
Musalia Mudavadi’s website, www.musaliamudavadi.co.ke, has been left out since it does not look like his official campaign website. If in any case it is the official one, it is so ugly to be on this list.
This ranking may soon be outdated as the politicians revamp, redesign or open new websites for their campaigns.
Our web designers need to borrow a leaf from campaign websites from developed nations. The websites are very detailed but not cluttered. They explain the candidate’s manifesto clearly. They integrate both social media and multimedia well. Video is one aspect that has been ignored on Kenyan politician’s websites.
Here is a snapshot of US republican presidential candidate, Mitt Romney’s website and the difference is clear. 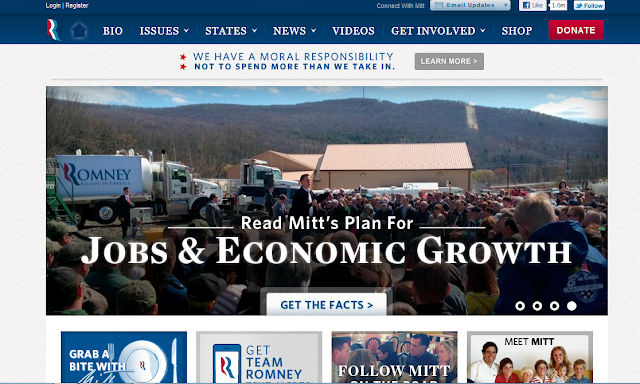 © nairobiwire.com
Busted’s Ciku Interview On CNN. Oh My God. < Previous
Funny Or Die? Amazing Video. Next >
Recommended stories you may like: