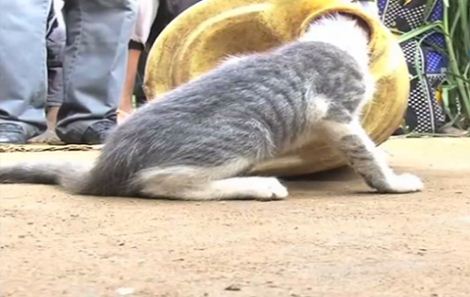 There was drama in Mombasa’s Kiembeni area yesterday, after locals gathered to stare at a cat whose head had been trapped in a jerrycan for 4 days.

Residents have refused to save it, attributing the phenomenon to witchcraft or demons. Some say that the cat is actually a human who was unable to change back during a ritual. Of the hundreds who turned up to watch the poor cat struggle in pain, none gathered enough courage to save it. KTN’s Ferdinand Omondi tried to save it, but was stopped by residents.

Listening to the reasons why they won’t save the kitten, it gets weirder. One villager recounted how one male cat recently gave birth to kittens, which they threw away. The said cat went away never to return.
Cat – demon stories are not new in the coast region. A lot of stories have been told about how some humans transform into cats, especially black ones, and cause havoc to the society. With this in mind, maybe the villagers worries were justified.
By evening yesterday, there were reports that the Kenya Society for the Protection & Care of Animals, KSPCA, had rescued the cat.

Loading...
President Uhuru Offers ‘Otongolo Time’ Narrator Daniel Owira Full Education Sponsorship Up to University < Previous
What Kenyans Think About The Mombasa ‘Cat Trapped in a Jerrycan’ Incident Next >
Recommended stories you may like: