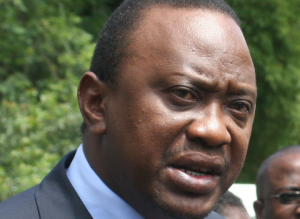 Uhuru Kenyatta has been constantly attacked by CORD for the amount of land believed to be owned by his family. It has widely claimed and almost accepted that the Kenyatta family owns more than half a million acres of land, scattered across Kenya; a number said to be bigger than the size of several provinces.
So far, no one has come forward to prove this claim, despite the dares by Uhuru himself. Legend has it that the Kenya’s first president, Jomo Kenyatta allocated himself vast amounts of land illegally, and went on to hand over to his family. After his death in 1978, the family remained and has continued to remain in one piece, with no known feuds. This can partly explain why the Kenyatta family has continued to flourish business-wise.

When Kenyatta died in 1978, the first family was not a recognized business player in the country. In fact, their only major resource was land. Part of which Mama Ngina has confessed she sold to pay for her children’s education. Most of the family’s recognized brands were established after the departure of Kenyatta. The man most responsible for this is not Uhuru Kenyatta but his brother Muhoho Kenyatta. Under his leadership, Kenyatta family has become a major player in several other industries outside agriculture. Among them are banking, media and education.

So which are these pieces of land kenyatta family is said to own? The following is an unverified list doing rounds.

52,000-acre farm in Nakuru
10, 000 acres in Rumuruti
40,000 acres in Endebes in the Rift Valley
On some of the above land, agriculture and other economic projects take place, in the process leading to the employment of thousands of Kenyans. A small part of the Kahawa land is occupied by the expensive Peponi School.
Some other businesses owned by the Kenyatta family include:
*Brookside Dairies,
*Commercial Bank of Africa,
*Mediamax [Owners of K24, Kameme FM, Milele FM, Meru FM, People Newspaper]
*Insurance companies in Europe
*Properties in Britain
*Peponi School
etc

‘My People Want Me To Be With DP Ruto,’ says Wamuchomba as She Ditches Jubilee