Jokes And Reactions on The New KTN Election Studio 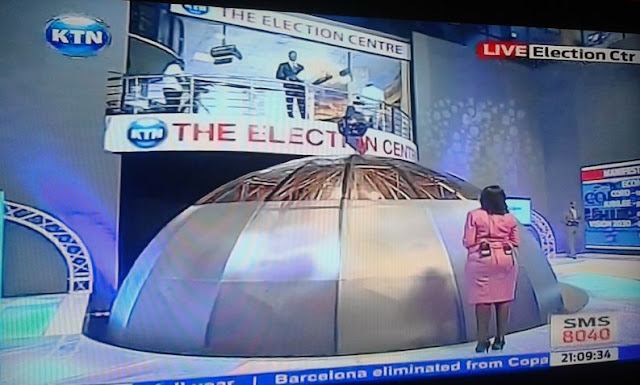 Yesterday, KTN reminded Kenya that it’s signals were out there when they launched a brand new state of the art, temporary election studio.
The station that has been struggling to regain its footing, got a big boost this week after Friday’s episode of it’s dating show Tujuane went viral, and they are now well on their way to taking over Friday nights.

Their new election centre could not have come at a better time. A few weeks ago, the stations that were strong contenders for viewership during the election period were NTV and Citizen TV, which has since been christened Cord TV. KTN has just joined them, and may actually beat them, considering what they’ve just put up along Mombasa Road.

The station has moved away from the virtual studio (which NTV and KBC has refused to abandon) and taken up flat screens.. a whole lot of flat screens.
They have what they’re calling the ‘Super Wall’, which is basically a wall made up of 25 screens connected to work as one. This concept was first seen on Citizen TV many months ago.
It is however surprising that none of the stations has ever bothered importing one very big screen instead of piling several 32 inches. The closest to a big screen is the 84 inches seen at NTV during its low profile launch last night.

KTN have further put up a Google Hangout area, where several people are involved in the discussion via live stream. To put the icing on the cake, the new studio has a balcony.. yes, a balcony that will be used during interviews of the various guests they will host.

However, all this is not permanent. The space where the election centre has been constructed is actually a sort of multipurpose hall, which has previously hosted Standard Group’s AGM among other meetings. That should explain the globe at the centre, which people are not loving.

Citizen will not counter KTN’s move by launching a new studio.They will just tell Janet mbugua to make the skirts 2 inches shorter.

Why does KTN’s studio look like a Las Vegas strip club?”

I love the new KTN election studio… Okay will this tweet get me a date with Anne Kiguta?

What a waste of really good clubbing space with that new KTN studio.

The KTN studio is too all over the place. They had a million concepts and decided to go with all of them instead of the strongest one.

Enyewe this KTN studio looks like a mixture of a strip club and a laundry shop.

Yaani the KTN studio looks like a space ship..what does that round thing in the middle do?

What has #KTN done to their studio?! Jesus Christ!

That KTN studio has the anchors working out… Wats with the panting? ..

If an alien ship does not land in the middle of that KTN studio before the end of this bulletin, I quit

I keep thinking that a stripper will pop out from that dome right in the middle of the KTN studio.

What is that huge as Dome for in that KTN Studio? I dont get it?

Ktn has set the pace for the future of tv broadcast in kenya .Only put good soundproof in the balcony studio next to the printing press !

Hey KTN, what a studio! you look more prepared for the coming elections than IEBC!

Loading...
Breaking News: Lilian Muli Returns To KTN < Previous
Pictures of KTN Election Studio While Under Construction Next >
Recommended stories you may like: