One on One With UDA Secretary-General Veronica Maina 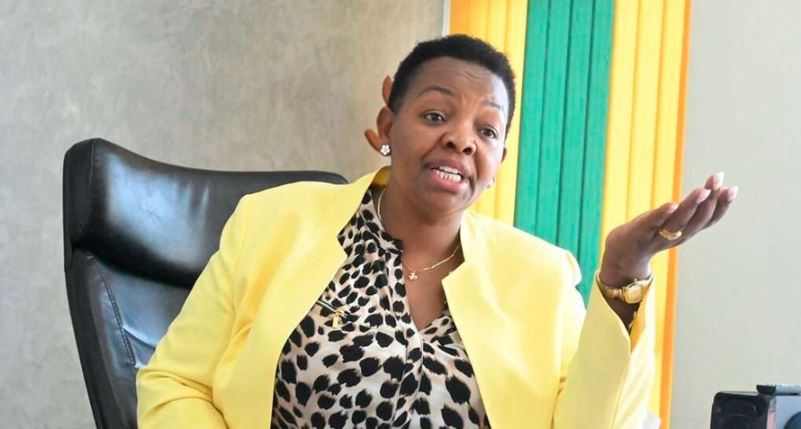 United Democratic Alliance Secretary-General Veronica Maina spoke to the Nation about why she left the ruling party where she held the same position, her working relation with President Uhuru Kenyatta and Deputy President William Ruto, the number of seats UDA is aiming for, nominations and the probability of a handshake between the President and the DP.

What is your relationship with UDA chairman Johnson Muthama and DP Ruto’s aide Farouk Kibet, in light of a video that appears to show you being rebuked?

We are good friends. I have never had a problem with Farouk, who helps us organise rallies. Political meetings can be chaotic. I also work well with the chairman. In fact, I met him in my office on Thursday. I saw the video on social media. People are generating lies about our National Delegates Conference. I work well with the two.

The party has good structures for primaries. We have ensured organs like the National Elections Board, National Dispute Committee and the disciplinary team are in place.

The disciplinary committee will enforce the code of conduct. The primaries will be a day’s event because we don’t want to tire our members.

How many aspirants have expressed interest in UDA tickets?

How much did the party collect from aspirants?

I can’t tell you that. Our party charged the nomination fee because primaries are very expensive. We need money and resources to conduct free and fair primaries. Everything collected will go into the nominations.

Which areas will UDA not conduct primaries?

There are such areas because the hopefuls have agreed among themselves to support one of them. We will not have nominations in Embakasi North constituency and some areas in the northeast and Nyanza. UDA has given aspirants time to discuss and agree amongst themselves. We will resort to free, fair and verifiable nominations in areas the aspirants do not agree.

Kenya Kwanza is not registered, but discussions among partners are ongoing.

Is consensus working in Kenya Kwanza? What are the challenges of this method of nomination?

It works when people sit down to talk. Every candidate feels she or he is good, but deep down, they know another person could be more popular than them. We ensure consensus is done with dignity. The challenge is that one candidate will always feel that the other has been favoured. Our politics is adversarial. In such a case, you allow nominations to take place.

How many seats is UDA targeting in the general election?

We are looking at a super-majority in the Senate and National Assembly, just like Jubilee had. We have close to 165 MPs, but with Kenya Kwanza partners on board, the figures will be much higher. We expect to have 65 per cent of members in the National Assembly and the Senate.

We want to win in at least 32 counties. This will ensure we do not encounter a challenge of numbers in both Houses should our president need something done.

Our scientific poll shows we will have more than 200 members. Note that we are not even done with creating a coalition. I still receive calls from parties that want to join us.

What is in store for those told to shelve political ambitions?

There are many areas people can serve. We have made it clear that the focus of UDA is the people and building the country’s economy. If there are opportunities, people will definitely get them. For those nominated by the party, that will be good. But is should be known that nomination slots are not enough for everybody. We have to consider regions, gender, the youth, minorities and people living with disabilities.

Let the aspirants also know that they still need to work together even after the elections. We need to move as a team.

You occupy a powerful position in one of the biggest political parties in the country. What is your view on women and leadership?

You cannot have leadership without women. A woman is at the centre of any society. God has blessed women with qualities that are slightly different from men’s. You ignore a woman, you ignore 51 per cent of the population.

What are some of the important managerial skills for anybody intending to be a secretary general of a political party?

I’m a Christian and an advocate by training. That gives me skills to understand the legislative framework of running a political party. I thank Deputy President William Ruto for allowing me to occupy such a position.

You need proper coordination skills as you are dealing with different kinds of people from different parts of the country. One must also be organised and alert on current affairs of political parties. You must read a lot, keep up with media reports, be inclusive, be a good writer and an orator. Communication skills are important.

When in a position like this, one has to sacrifice a lot of time and energy. If it is a woman, she must be prepared to give more than a man would. You at times get the feeling that people do not trust your leadership or work. Fortunately, the results for one’s work are there for everyone to see.

What have been your highest and lowest moment since becoming the UDA secretary-general?

The latest low moment is when our aspirant in Mombasa was shot 22 times. I still don’t understand that attack. It appears the assailants were out to kill him. It is very depressing. I also don’t like it when I hear and see people verbally ripping one another apart and going into the personal lives of opponents. These people do not seem to mind that the individuals they talk about have families.

My highest moment as the UDA secretary-general was the day our National Delegates Conference nominated Dr Ruto as our 2022 presidential candidate and the promises he made to Kenyans through the bottom-up economic model. He said no vulnerable Kenyan would go to bed hungry.

I am also overwhelmed by the support we have received from Kenyans since our inception as a party. We started with 53,000 members, but the number has grown to more than seven million. That should tell everyone that UDA is the biggest political party in the country. I’m happy UDA is setting the trend for other political parties.

How did you become the secretary-general of the UDA?

I hold this position courtesy of many people in UDA, including the party leader, who have confidence in me. I worked in Jubilee with a lot of members, who are currently in UDA. Through the support I got from the back end, they settled on me for the position. I work with everybody.

How many people work at UDA?

We have people on a needs basis and volunteers. Others work for two or three days then leave, but we have 30-40 core staff at the headquarters. They are involved in administrative work. But remember the UDA also has people working across counties and constituencies.

How did you acquire UDA and from whom?

I was not part of that process because I joined UDA in March last year. However, I know that UDA was rebranded from the Party of Development and Reforms. That means my history starts from the date of the UDA gazettement.

Do you have political ambitions, even it’s not in the upcoming general election?

Not at the moment. My ambition now is to grow a strong political party.

How is working with the Deputy President as the UDA party leader?

The Deputy President is very accessible. He is easy to work with and listens to everyone. He is very hardworking, focussed and intelligent. The DP is also very alert politically. He is a hands-on person, so most of the time our challenge is playing catch up with him. The popularity of our party has been increasing because of him.

Is Dr Ruto running on a UDA or Kenya Kwanza ticket?

UDA has already given him the mandate to fly our flag. But we also have a coalition arrangement with ANC and Ford Kenya under Kenya Kwanza. We hope he will be endorsed as the Kenya Kwanza alliance presidential candidate.

At what point did you leave the ruling Jubilee Party?

I came to UDA in March 2021 but had resigned from Jubilee in December the previous year. I didn’t know who I was in Jubilee anymore. Someone was changing officials of the party and I was not being consulted. We were not doing anything by the time I left, not even meetings. I left my position to Raphael Tuju.

Some people wanted to remove us towards the end of 2020. That is when I quit. I did not want to fight anyone as I was holding the position in good faith. You must choose your battles well. There is no need for unnecessary wars.

After a short while, I was invited to UDA by members, who had confidence in me. They told me to continue the work I had started in Jubilee. They have given me support.

Was the merger of many parties to form Jubilee a good idea, bearing in mind what later happened?

No political parties had successfully merged before. I was the secretary-general who led the merger of the 12 political parties to form Jubilee. The 2002 Kanu-National Development Party merger was a disaster. Everybody knows what happened later.

The Jubilee merger was supported by President Kenyatta and Deputy President Ruto. It was a good idea meant to transform the way politics is done in this country. It was modelled on the concept seen in the United States and the United Kingdom where there are two or three major political parties with clear ideologies.

One of its main ideas was to bring Kenyans together to share the national cake and participate in governance. However, the (March 9, 2018) handshake (between President Kenyatta and Orange Democratic Movement leader Raila Odinga) happened.

The opposition is now part of the government and we now have one person not liking the other. UDA is modelled on that concept. Everyone in the 47 counties can walk in it. Jubilee did not complete its work, but we can do so, especially by promoting unity among Kenyans.

The fact that it did not work during the Jubilee administration does not mean the concept is bad. Had it worked well, it would have given Kenyans two to three political vehicles to choose from during elections. That is what political parties should focus on. We must have parties that propel us beyond general elections.

You have worked with President Kenyatta and the DP. What is their working style?

You can’t compare human beings. They have different styles. Every person has unique leadership qualities. I appreciate the President and the Deputy President. We love our President and always pray for him.

Even today, we still look forward to the day the two will shake hands. Kenyans are still waiting because it is good for the country. If the two can reach out to each other, it will prepare us strongly for the general election.