This is How Much the President, DP will Earn as SRC Announces New Salary Structure for Civil Servants 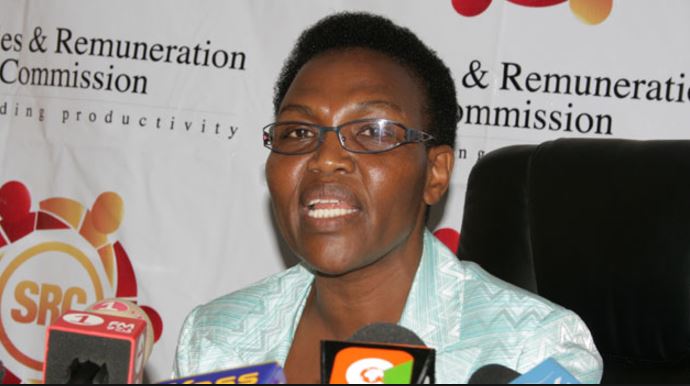 The Salaries and Remuneration Commission has reviewed salaries of various State officers including the president and his deputy.

Under the new structure released by Sarah Serem yesterday, President Uhuru Kenyatta and his Deputy William Ruto will earn a monthly gross of Sh1.4million and Sh1.2million respectively down from Sh1.65 million and Sh1.4 million.

According to SRC boss Sarah Serem, the new structure is aimed at slashing the public wage bill by 35 percent and save Kenya over Sh8 billion a year.

Some of the perks the Salary commission scrapped are mileage and special responsibility allowances that it said “were prone to abuse”.

Governors’ and deputy governors’ allowances have also been scrapped.

MPs will also not be paid a sitting allowance for plenary sessions while House managers, such as the majority and minority leaders and committee chairmen, have lost special responsibility allowances.

Speaker of both Houses will take home Sh 1.155 million each from the previous Sh1.32 million while their deputies will earn Sh924,000.

Below is a summary of the proposed cuts:

Hilarious Meme Compilation (Tuesday July 11) < Previous
All The Trending Images in Nairobi This Tuesday Next >
Recommended stories you may like: