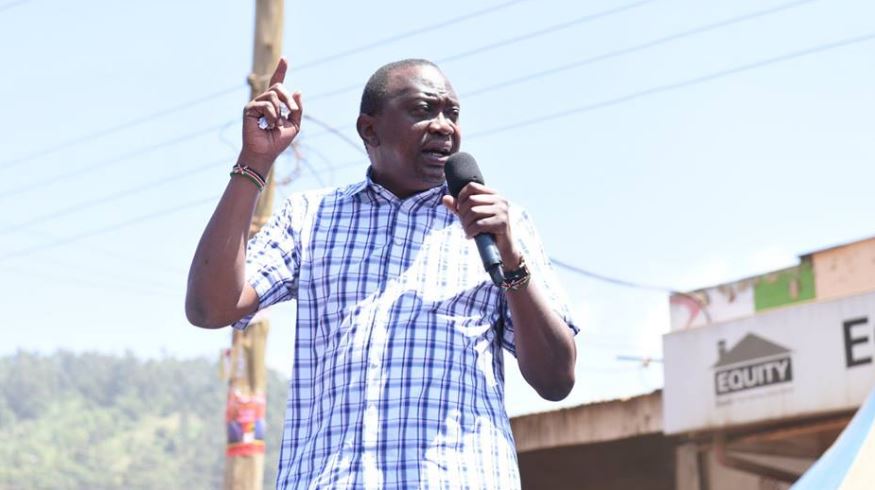 He already has the title ‘President’, but now we can add ‘Rainmaker’.

For the past few days, Uhuru has been touring central Kenya to mobilize his supporters to register as voters.

This mass voter registration exercise happens to take place at a time the country is grappling with drought. Weathermen have predicted that most parts of the country will not see rain for several months. The result of which will be scenes of hunger-stricken people that have now become commonplace.

Nyeri, just like the rest of Kenya, has not been spared by the lack of rainfall.

On Friday, Uhuru was in the town and a request was made that he prays for the rains.

The president hesitated initially, saying he is not a pastor or rainmaker. But the crowd insisted which left him with little choice.

He reportedly said this short prayer in Kikuyu.

In what can be concluded to be a miracle or a big coincident, the heavens opened up moments later.

Heavy rainfall descended on the town, leaving residents to run for cover, believing their president is ‘anointed’. 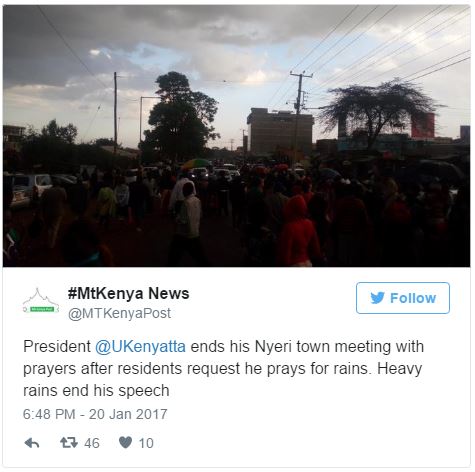 The president was himself forced to cancel another scheduled rally at Kiganjo area due to the heavy downpour.

Well, I wouldn’t want to speculate, but he put in a few other requests in his prayer. I think time will tell whether God’s answer for the rest was in the affirmative too.

Watch: President Uhuru Kenyatta Catches the ‘Thitima’ Fever (VIDEO) < Previous
The Hottest Stories on the Internet Today (Tuesday January 24) Next >
Recommended stories you may like: