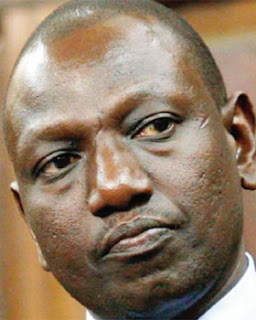 Politics is a matter of mind games; saying one thing when it suits you and denying it when it doesn’t. It’s however quite bad when the evidence is dropped right in front of you that you are lying.
Ruto and his supporters have claimed often that Raila ‘took them to the Hague’, and though at first it looked stupid, people (mostly illiterate and jobless) started believing it. It has now become a song in Rift Valley and Central, where Ruto and Uhuru have their bases.
An article that appeared on Daily Nation issue of February 21st 2009 titled “Ruto: Why I Prefer The Hague Route”, is set to become one of the critical ‘campaign documents’. The legislator was then asking Koffi Annan to forward the ‘Waki’ envelop to ICC immediately.
Now, ODM reloaded team is using the article to drive their point home; That Raila did not take anyone to Ocampo. During their rallies in the Rift Valley, they are distributing copies to the whoever cares to have one. Below is the article.

Ruto: Why I prefer The Hague route

Agriculture minister William Ruto wants the secret envelope containing names of the post-election violence suspects handed over to the International Criminal Court at The Hague without further delay.
Mr Ruto says the two-month period given by former UN secretary-general Kofi Annan to Kenya to make a new attempt at setting up a local tribunal to try the suspects was unnecessary.
“Kofi Annan should hand over the envelope that contains names of suspects to the International Criminal Court at The Hague so that proper investigations can start,” Mr Ruto said. “Mr Annan should allow us to move forward. We cannot just get stuck in one place addressing the same thing.”
Mr Ruto’s latest stand contradicts the position of Prime Minister Raila Odinga, leader of his ODM party, who prefers a local tribunal.
A government motion to set up a special local tribunal was defeated in Parliament earlier this month, raising the possibility that suspects whose names were given to Mr Annan in a sealed envelope by the Waki Commssion could be taken to The Hague for trial.
The Hague option was to be activated should Kenya fail to establish a local tribunal as proposed by the commission that investigated the post-election violence.
Mr Ruto – whose constituency was among those worst hit by violence — spoke during the week he weathered a storm in Parliament over a maize scandal in which brokers are believed to have benefited by trading with national food security reserves at a time when the country was facing widespread hunger.
The minister described the attempt to pass a no-confidence motion against him as his most trying moment politically.
“It touches the soft belly of the nation. Food and hunger are very sensitive and delicate issues. When a whole machine has been turned against you as the cause of hunger in the face of hungry people, it is very trying to try to explain your contribution. Thank God I managed to explain myself,” the minister told the Sunday Nation.
In a wide-raging interview Friday, Mr Ruto maintained that Justice and Constitutional Affairs minister Martha Karua had approached him seeking to form a political alliance ahead of the 2012 elections.
“She attempted to draft me into the 2012 succession game. She sent emissaries to me, and we met twice, but I declined because we had just come out of a very difficult time of violence. She has tried to deny this saying I had baggage. When did she discover I had baggage, and which William Ruto was she desperately looking for?” he asked.
But Ms Karua told the Sunday Nation that there was no way she would have sought an alliance with “someone who has baggage over corruption cases”.
Ms Karua has repeatedly asked Mr Ruto to “take political responsibility” and resign over the maize scandal. The matter attracted a new ally for Mr Ruto in Energy minister Kiraitu Murungi, who challenged Ms Karua to show what practical steps she had taken to fight corruption instead of asking her colleagues to resign.
Analysts saw Mr Murungi’s stand as the purchase of political insurance from Mr Ruto should the Energy minister have to face a censure motion in Parliament over the Triton scandal involving petrol storage and distribution.
However, Mr Murungi said that his position was informed by a principled stand against “the doctrine of political responsibility where ministers pay for the crimes of civil servants.”
And speaking in Sotik on Saturday, Mr Ruto faulted the Waki Commission’s post-election violence report yet again, saying it was “full of rumours and hearsay”.
He said it was misleading for the report to state that the violence had no relation with the announcement of the presidential results.

The minister alleged that the Waki report targeted those who complained about the outcome of the last General Election while leaving out those who he claimed engineered an alleged electoral fraud.

And for a third time, the extent of the frosty relations within the grand coalition Cabinet came out in the open.
Mr Ruto accused Ms Karua of “doing nothing” to fight corruption and asked her to resign.
The minister was accompanied by his Roads counterpart Franklin Bett, assistant minister for Energy Charles Keter, MPs Joyce Laboso (Sotik), Isaac Ruto (Chepalungu), Francis Chachu (North Horr) and Sotik DC Amphrey Nakitare.
Mr Ruto said that witch-hunting would not help improve the lives of Kenyans and urged leaders to come up with coherent plans to fight corruption instead of fomenting political hate. He urged Kenyan leaders to take responsibility and lead from the front if they expect to build a united and healthy nation.
The minister at the same time censured church leaders who publicly criticised President Kibaki and Prime Minister Odinga during a meeting at the Kenyatta International Conference Centre.
He said it would have been more equitable had the church leaders booked appointments with the President and the PM at State House to discuss their issues.

[Archive article by Nation]
© nairobiwire.com
The World’s Poorest President < Previous
Thanks God Its Friday, But Bifwoli Wakoli Saga Continues Next >
Recommended stories you may like: