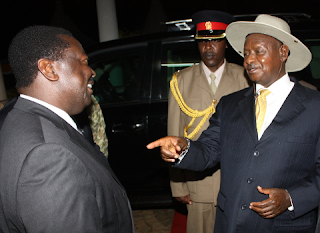 ODM deputy party leader Musalia Mudavadi held a secret meeting with Uganda’s President Yoweri Museveni on Tuesday morning. Although the Star could not establish the agenda of the five-hour meeting at State House Kampala, it emerged that the talks centered on regional politics. “We know that they discussed regional politics, including succession politics in Kenya. Other than that we can’t tell,” stated our sources.
Multiple sources yesterday revealed that the Deputy Prime Minister Mudavadi and his wife, Tessie, travelled to Kampala on Tuesday at the invitation of President Museveni. Former President Moi’s roving envoy, Mark Too, also attended the meeting. Yesterday Mudavadi’s private secretary and director of communication Kibisu Kabatesi could not confirm or deny that the trip or the meeting took place.
President Museveni has been meeting potential President Kibaki’s successors in Kampala. President Museveni has met with Prime Minister Raila Odinga, Vice-President Kalonzo Musyoka, Deputy Prime Minister Uhuru Kenyatta, Eldoret North MP William Ruto and Justice and Constitutional Affairs Minister Eugene Wamalwa. On February 19, President Museveni was the guest of Raila at his Bondo home. President Museveni was later installed as an elder of the Luo community.
After presiding over the Great Lakes University Education Trust fundraiser on that Saturday, Museveni was made a Luo elder and named Yoweri Museveni alias Ogolla. After the event, Museveni had dinner at Raila’s rural home. The dinner was also attended by Mudavadi. According to multiple sources, it is here Museveni asked why he had not been introduced to Mudavadi.
During the Bondo meeting, Mudavadi had an hour-long meeting with Museveni. The talks involved top NRM officers and Sam Kutesa, the immediate former Foreign Affairs minister. Yesterday, sources revealed that the tightly controlled five-hour trip to and from Kampala was squeezed in between the Local Government minister’s schedule of meeting ODM party delegates on Tuesday. After Mudavadi flew back from Uganda, he went ahead that afternoon to meet supporters in Siaya.
Uganda’s Foreign Office is said to have got in touch with former President Moi’s roving envoy, Mark Too, to establish contact with Mudavadi. “Uganda’s foreign office dispatched Mark Too to organise the meeting,” stated our sources. Mudavadi has been on the campaign trail to win over ODM delegates countrywide in plan to challenge his party leader Raila for the party’s presidential nomination.
On Thursday while campaigning in Kisumu, Mudavadi called on party delegates to consider the now changed political landscape in choosing the party’s flag bearer. Addressing ODM Kisumu county delegates at Tom Mboya Labour College, Mudavadi said Kenyan politics has taken a new direction from that of 2007. The December 27, 2007, presidential election dispute between Raila and President Kibaki resulted in the 2007-08 post-election violence. “A very important message that I have come to deliver to you is that the current political landscape is very different from that ODM enjoyed in 2007 and needs to be taken into consideration in determining who carries the party’s flag,” said the ODM deputy party leader.
He said the current political climate favours him as the party’s presidential candidate and that he is ready to spur the ODM party to the country’s top leadership position. Mudavadi said ODM lost numerous parliamentary seats in Kisii in 2007 due to an unfair nomination process which led to mass defection. “If we don’t put our house in order and adopt fair nomination process then how would you expect my supporters to support Raila or his supporters to back me?” he posed.

The Kardashians Go To Church. < Previous
Gospel Artiste Kambua,Gets Married. Next >
Recommended stories you may like: