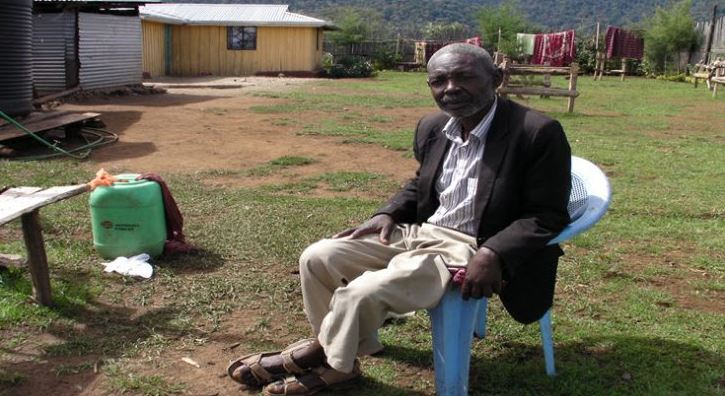 A former classmate of President Uhuru Kenyatta has appealed to the Head of State to come to his rescue.

David Kipngetich Towett, 58, is living in abject poverty and hopes that his former classmate at St Mary’s Primary School in Nairobi can help him.

Towett is also the son of former veteran politician and Education Minister, the late Dr. Taita Towett. He said he had big dreams of walking in the footsteps of his father who took him to the US for two years (1963-1964) where he attended kindergarten while the big man furthered his studies.

A report by KNA says that Towett said he cherishes the two years, 1968-1969, he spent at St Mary’s Primary School, recalling the times he used to play and interact with Uhuru and other pupils, most of them of European descent.

He said he broke through security detail during the opening of Imarisha Kebbo Plaza on Kericho-Nakuru highway on December 9, 2016, to catch the President’s attention.

Towett recounted how he managed to speak with President Uhuru near the Kericho County Commissioner’s offices where his motorcade had stopped briefly for him to address residents.

He said Uhuru directed him to enter one of the security escort vehicles but Towett got cold feet, something he regrets to this day.

The former army man wants Uhuru’s help in order to provide for his eight children, some of whom have dropped out of school over lack of tuition fees.

He dreams of seeing his daughter resume education after she dropped out of Moi University, Eldoret while in her second year.

“I have hope of seeing my daughter complete her university and become a secondary school teacher. She would have become a pillar of strength to the family. I am appealing to President Kenyatta to grant me this wish,” he says.

Towett adds that his family story is one of grace to grass following the untimely death of his father in a road accident in 2007.

“I worked in the Kenya Army for just two years from 1980 to 1982 before being dismissed. I was an errand person doing menial duties. At the time, my late father was the Education minister. I then joined Mau Forest Tea Factory where I worked shortly before joining Marinyiny Tea Factory where I worked as a supervisor from 1984 to 1987. In 1989, I joined Telkom Kenya where I worked as a porter in Nakuru, Kericho and Bomet counties until 1997.  After leaving Telkom, I opted to become a small-scale farmer. I ought not to have relapsed into poverty despite the loss of the family’s main breadwinner, my father,” he said.

“I don’t know what crime I did to deserve such a life. I pray that this ends,” a teary Towett added.

Loading...
Shocking VIDEO of Nyeri Deputy Speaker Assaulting Man During Tangatanga/Kieleweke Clashes < Previous
The Top Stories on the Internet Today (Wednesday December 11) Next >
Recommended stories you may like: