The incident occurred after rival groups allied to the Kieleweke and Tanga Tanga factions clashed at Giakanja Boys Secondary School.

In the footage, Kariuki, who doubles up as the MCA for Ruring’u Ward, is seen whipping a helpless man with a wooden rod as other men cheer him on.

In an attempt to escape the rowdy crowd and the beating, the man tumbles on the ground, with Mr Kariuki striking when the iron is hot.

The other men cheering the lawmaker on are also heard shouting, ‘Ua! Ua! Ua!, as the deputy speaker runs after the man and continues to strike him. 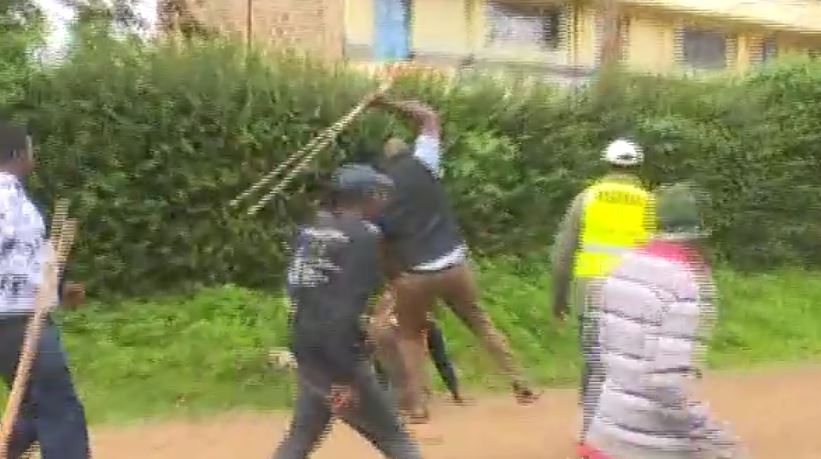 Kariuki was initially arrested in the Sunday melee before being released under unclear circumstances.

Nyeri MP Ngunjiri Wambugu claimed that the MCA fled the country on Sunday night to avoid the pending arrest.

“Apparently the Speaker of the Nyeri County Assembly organized a trip for the Deputy Speaker to leave the country last night so that he doesn’t get arrested. I hope the EACC & the DCI to investigate how this decision to travel was reached and whose funds were used,” Wambugu said.

Police in Nyeri on Monday issued a warrant of arrest against the Nyeri Deputy Speaker, a die-hard supporter of the Deputy President.

Confirming the arrest warrant, Central Regional Commissioner Wilfred Nyagwanga said at least 10 people were arrested during the chaos which erupted ahead of a fundraiser where Deputy President William Ruto was the chief guest.

Nyagwanga said all those who were involved in the chaos on Sunday will be presented in court this week.

Here’s a video of the Nyeri Deputy Speaker assaulting a man on Sunday.