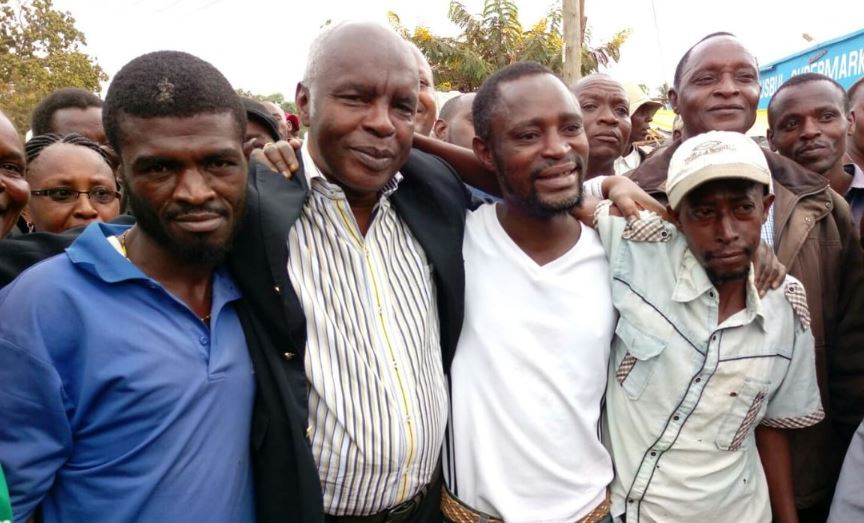 Makueni Governor Kivutha Kibwana answered questions from Kenyans in a Q & A session with the Daily Nation on Sunday, December 8.

Ukambani region is endowed with natural resources and intelligent people who are ready to work together. However, why are our leaders moving in different directions politically? What is your remedy for this obstacle?Mwania Francis, Kitui West

It is true the south-eastern Kenya region is a land of many firsts.

However, since independence, the region’s leadership has not squarely focused on the steps needed to uplift the people economically.

The emphasis has been sterile, self-centered politics. Among the earlier leaders, Mulu Mutisya, after Paul Ngei’s reign, tried to lead the Kamba nation into some visibility and prosperity.

However, the current key leaders are divided into those who promote social and economic uplifting of the people and those who wish to perpetuate ‘kingpin’ politics.

Real unity of the region’s people and that of Kenya will materialise around the necessary socio-cultural and economic measures needed for the people’s transformation.

I believe the emergence of the South Eastern Kenya Economic Bloc (Sekeb) currently led by Archbishop Timothy Ndambuki will be the indomitable vehicle that will bring the three counties together with their diaspora for development.

Many development partners have rated your county highly on the milestones achieved in the health sector. Has the Medical Equipment Scheme contributed to the success? Komen Moris, Eldoret

The controversies around the leased medical equipment scheme are mainly about planning, procurement, cost and utilisation.

The equipment by themselves are actually a good thing for counties and the country.

Before their acquisition, the government ought to have ensured that there is requisite space to house the equipment and staff to operate them.

What is the endgame regarding your falling-out with Wiper leader Kalonzo Musyoka and the emerging unity involving governors Alfred Mutua (Machakos), Charity Ngilu (Kitui) and yourself? What broke the camel’s back in so far as your political relationship with Kalonzo Musyoka is concerned? Duncan Mulinge, Makindu

We agreed with Kalonzo Musyoka each one of us would do politics their way.

My entry into Wiper was negotiated between the people of Makueni, Kalonzo and Wiper.

When I felt the association was no longer productive and tenable, I reported to the people of Makueni.

The unity of the three governors of Ukambani, the county assemblies, the leadership of the religious sector and the cultural elders is driving Sekeb.

We are now focusing on economic transformation. I have moved on and I believe Kalonzo Musyoka has moved on too.

It is up to the region’s people to eventually decide the brand of politics and leadership they want.

There is concern that the Council of Governors is not adding value to devolution and hardly can Kenyans associate it with any landmark achievements for our counties since 2013. Moreover, even though it is not an employer, it wants to have a say on collective bargaining agreement (CBA), for example, for health workers. What is your take on this? Dan Murugu, Nakuru

I believe, particularly between 2013 and 2017, the Council of Governors (CoG) bravely stood its ground to safeguard devolution.

We were ably aided by the Judiciary. We insisted on the prompt transfer of devolved functions to counties.

We resisted and challenged passage of laws that undermined devolution.

We put in place 47 brand-new governments and the corresponding initial structure, processes, procedures and employed staff.

Devolution’s teething problems are to be expected. The health function is by and large, a county function.

It is counties that employ health personnel and who sign the CBA with them. The CoG is a statutory body which acts on behalf of the 47 governors.

Where there is conflict, both the health personnel and the governors should expeditiously dialogue to restore uninterrupted services to our people.

Makueni County has been termed a case study in successful devolution in Kenya. How differently do you handle governance and what policy issues can other governors emulate? Dan Murugu, Nakuru

In the county, we decided to involve our citizens in their government. We organise from the village level.

The citizens decide on their annual development budget. About 100,000 people from roughly 1,000,000 citizens usually participate in budget-making.

Each project has a project management committee elected from its beneficiaries.

A contractor cannot be paid without these citizens’ approval alongside concurrence by the technical people and county administration. We shun corruption and we punish those caught.

We try to find out what citizens are doing for their economic transformation and then we help upscale it.

Currently, we are working to ensure each county function is covered by policy and law.

Our employees know that they have delegated power and brain room for innovation.

Do you think the model of the Kenyan economy is able to guarantee shared prosperity to all Kenyans? Ann Njoki Njunge, Limuru

If there is one enduring lesson from the Building Bridges Initiative report, it is the stark admission that the Kenyan economy is currently not providing enough stability and prospects for young people and other Kenyans.

Citizens told the BBI task force that our country’s political, social and economic systems must be overhauled.

Unlike other societies where citizens take matters into their hands, Kenyans are looking forward to an honest national conversation on the economy and the Kenya we want.

Corruption is strangling the economy. We must decisively deal with this scourge.

Regarding Ngai Ndeithya degazettement and excision from game reserve for purposes of issuance of title deeds to inhabitants, how far has this process gone? John Munyao, Nairobi

On April 12, 2016, upon repeated requests by the Makueni County government, the Ministry of Lands and Physical Planning finally approved the degazettement and excision of the Ngai-Ndethya game reserve in favour of those ordinarily resident in the area.

The county did its part in authorising the degazettement as demanded by the law in consultation with the National Land Commission.

The county undertook the requisite Environmental Impact Assessment, whose report was adopted by Nema.

Excision and survey have been done even for the individual parcels and is awaiting final approval by the national government.

Are there any plans to put up an electric fence along Mtito-Andei River to end the human-wildlife conflicts in the area? John Munyao, Nairobi

It is a fact that human-wildlife conflict is one of the greatest development setbacks in Makueni. Early next year we plan to hold a conference on the same.

Through collaboration between Tsavo Trust and the Makueni County government, we have submitted a proposal to USAID through the Kaunti Kuimarisha Uendelevu – Strengthening County Sustainability Annual Programme Statement.

The concept referred to as ‘Elephant exclusion zone’ encompasses simple and effective fencing to keep elephants away from the community.

Your agenda on county development projects seems to have given little attention to road infrastructure, particularly in Mbooni West. The major Kali-Kikima-Kyambalasi road has become impassable, especially during heavy rains. How long will the problem persist? Martin Muia, Kikima-Mbooni

We inherited a total of 6,900 kilometres of county roads infrastructure with 90 per cent in deplorable condition.

We documented the historically problematic spots across the county. The budget required to address the upgrade of our roads to all-weather status is quite significant.

Some of the spots lie along national government roads like Kali-Kikima-Kyambalasi road.

Since the road serves our people, we have gone out of our way to address the spots on this road.

Those who use the road can witness that notorious spots like those immediately before and after Isuuni River were recently fixed.

Notably, this road had a contract and we are following up with the national government to ensure completion of the project.

The current heavy rains have affected 67 of our roads, 11 of them being in Mbooni. We shall repair these as soon as the rains abate.

Over 1,000 employees have worked on contract for four years, receiving Sh15,000 a month as health workers in Makueni County. Some are certificate, diploma and degree holders yet they all earn the same salary. I worked for four years under different one-year renewable contracts and no penny received as gratuity despite money being allocated. As a lawyer, what does the law say on contract? Is there hope that we could eventually be paid what I believe is due to us? Matheka Stephen, health worker

First, I want to clarify that we have 350 employees on contract and not 1,000 as stated.

Also in the current context, the staff earn a consolidated monthly pay of Sh40,000 and not Sh15,000.

Employees who are on contract are entitled to gratuity at the end of the contract period. The county government employee’s gratuity scheme is managed by Laptrust.

Any employee whose contract has ended is supposed to get clearance from the county government to access the gratuity.

If you were to run for president in 2022, how would you fund your campaigns considering you recently said the cost of vying for presidency is very high? Githuku Mungai, Kiambu

In many parts of the country where I go, many people ask me to vie for the presidency in 2022.

I cannot take this genuine call for granted. But in the past, many progressive individuals such as Paul Muite, James Orengo, Wangari Maathai, Martha Karua, James ole Kiyiapi, Peter Kenneth and others, who hastily stepped into the presidential ring, failed to capture Kenya’s imagination.

They did not have adequate campaign money, multi-ethnic networks, support of an entrenched system and the attention of the rural voter.

In the 1990s, Rev Mutava Musyimi, Willy Mutunga and myself were asked to be compromise presidential candidates.

However, we declined. I am ready to participate with any group of dedicated, hardworking and visionary Kenyans who wish to move Kenya to the next level in 2022.

Nobody can make it to the ultimate political leadership of our country on their own. We need a robust movement for change and continuity.

But we should change the laws to make political parties to be based on real ideology and vision and regulate campaign financing so that we don’t just buy physical electoral victory.

I would like, with those we work with, to run a campaign financed by the Kenyan voter like Barrack Obama’s USA campaign.

That way the leaders can dedicate themselves to employing the people’s resources to development because they did not bribe citizens with handouts.

Instead, the people will have literally elected us through their finances.

Loading...
All The Trending Images This Monday < Previous
I Wish my Dad was here to Witness this Milestone, Says Esther Wahome After Earning Honorary Doctorate Next >
Recommended stories you may like: