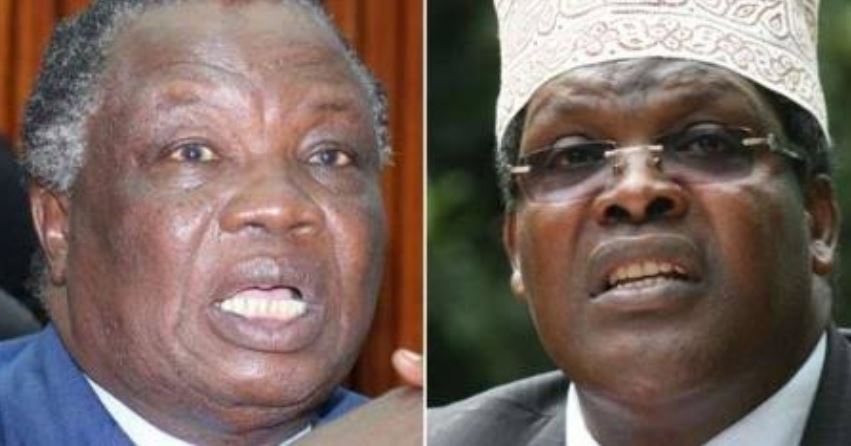 Miguna Miguna has done it again. The self-styled revolutionary has managed to chase another “despot”, in “Francis Atwoli”, off Twitter.

But there’s only one problem. The exiled lawyer only managed to kick a fake Atwoli off the microblogging site.

All this went down on Monday morning after Miguna Miguna engaged in a heated argument with a Twitter account bearing the name of the Central Organization of Trade Unions (Cotu) secretary-general Francis Atwoli.

The parody account, @sg_atwoli, tweeted: “#KOT Youths must be very shallow to think that constitutions are written by youths. The American constitution which is one of the oldest in the world was prepared by old men and they never consulted the youths.”

In a characteristic response, Miguna tore into Atwoli describing him as a despotic zombie.

“They were not half your age, despotic zombie Atwoli. They were all highly learned and experienced JURISTS. None was illiterate like you. None was a sycophant. You should be taken to the World Zoo for Human Primitivity and displayed there for free as a lesson to the world,” wrote Miguna.

In another post, Miguna said: “One last thing ossified looter Francis Atwoli: The PLURAL of Youth is Youth. “Youths” may exist in your despotic language but it doesn’t exist in the English Language. Avoid using @Twitter with that level of illiteracy. Do you understand, Zombie?” 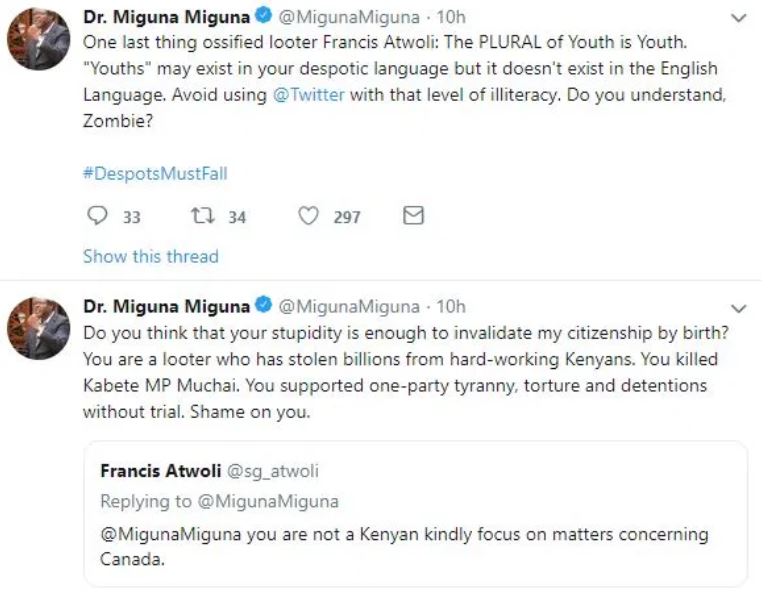 “We chased Despot Muigai Uhuru Kenyatta off Twitter and off Facebook. Now we have done the same to Francis Atwoli. Let’s drive them from Kenya! Revolution is coming. Viva! #DespotsMustFall” he tweeted. 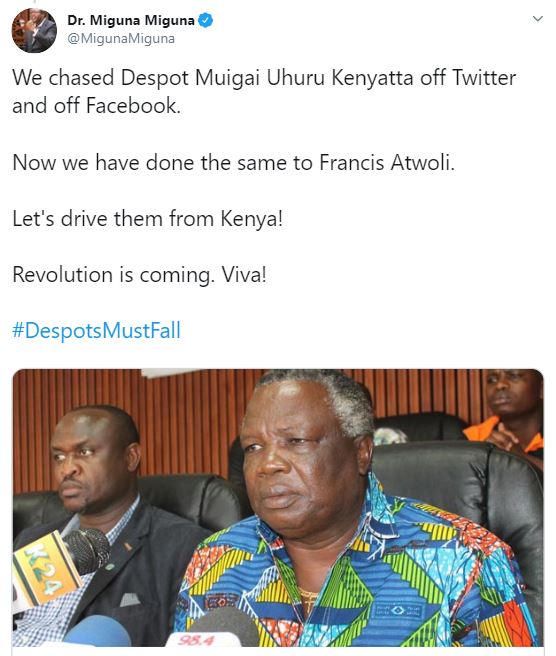 As a majority of Kenyans on Twitter joined Miguna in celebrating the feat, others were quick to remind him that he was engaging with a fake Atwoli.

Kenyans are truly a bored lot …. They cheered on the Mentally Insane Canadian as he was fighting with a fake Atwoli twitter account … When one misses their meds, they even fight their own shadows. We sink low as a people when we stop to cheer a public show of a mad man.

If you’re having a rough day, please note that @MigunaMiguna went ballistic on a fake Atwoli account 😂 😂 😂 @Asamoh_ @Disembe pic.twitter.com/pls2xqGMHC

Today Miguna Miguna has learned, he was ranting at @sg_atwoli TL thinking it is Atwoli’s Twitter account kumbe it is a fake one, the correct one is @AtwoliDza next time he should do his research well.

Daktari General @MigunaMiguna has deconstructed, dissected & Reduced the Mouthy Stoneage Old Fossilized braggart Atwoli to a village Quack & sent him off Twitter to have time with his grandchildren.

Loading...
Teenager Accused of Stabbing Girl 26 Times to Undergo Mental Checkup < Previous
The Top Stories on the Internet Today (Wednesday December 4) Next >
Recommended stories you may like: