Man Who Butchered Elephant in Viral Video Charged in Court

Kenya Wildlife Services (KWS) has identified one of the men who were caught on camera butchering an elephant at Imenti Forest in Meru County.

A video of the shocking incident was shared widely on social sites last month with many believing that it was recent.

However, Kenya Wildlife Services (KWS) clarified that the incident took place on June 21, 2018, when a report was made that an elephant had been killed by villagers in Imenti Forest.

Authorities have since identified one of the suspects, Kenneth Baabu Muthaura, who was arrested alongside two others.

KWS assistant director in charge of Eastern Conservation area, Michael Wanjau, said they tracked Muthaura to his home in Meru where he was positively identified by local elders and relatives as one of the persons in the video. 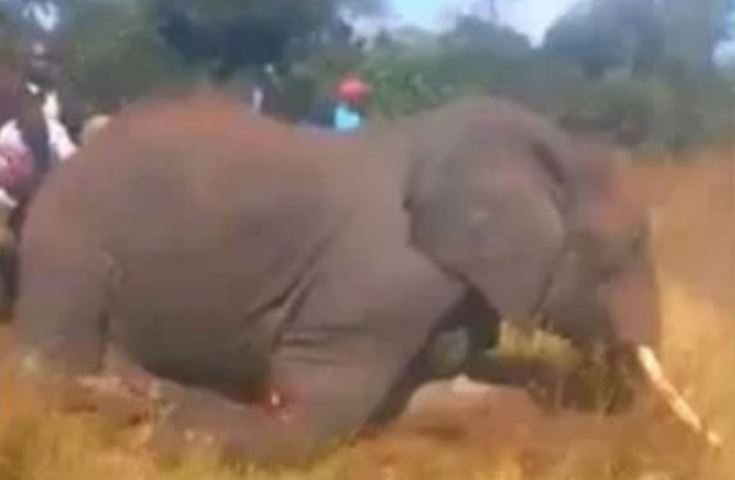 Wanjau added that they are hunting down 10 other suspects identified from the video.

Kenneth Baabu Muthaura was arraigned at the Nanyuki court on Monday and charged with killing an elephant without lawful authority. The other two suspects were let off the hook over insufficient evidence.

Appearing before Nanyuki Resident Magistrate Vincent Masivo, the accused denied the charges and was released on a Sh300,000 bond.

The case will be mentioned in January 2020.

Loading...
Ex-Egerton Student Charged With Girlfriend’s Murder Seeks Plea Bargain < Previous
‘Carry Your Own Cross!’ – President Uhuru to Graft Suspects Next >
Recommended stories you may like: