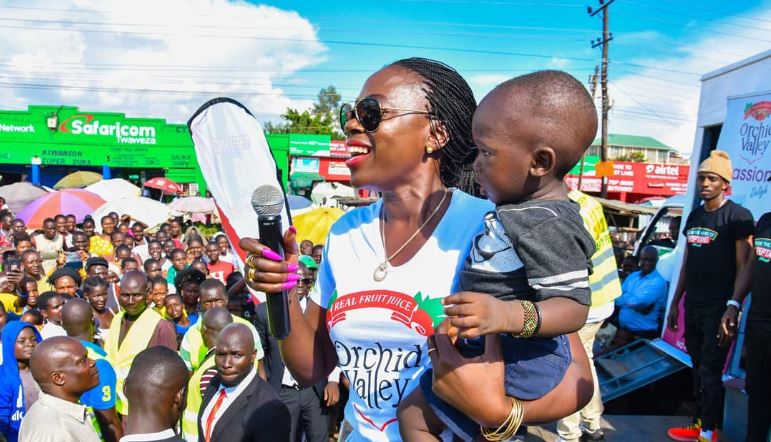 The singer has over the past year dedicated part of her life to helping the drought-ravaged people of Turkana and this has caught the attention of Italian media.

Akothee was featured in an interview piece by Italian reporter Stella Pende, dated November 30, in which the singer talks about her passion for helping people in need.

The self-styled ‘president of single mothers’ took to social media on Tuesday to share videos of the interview.

“AKOTHEE Showing live on Italian international TV💪 interview by Stella Pende 🙏🏾🙏🏾🙏🏾🙏🏾 I don’t know the plans God has for AKOTHEE but I know He has plans 💪,” wrote her manager Nelson.

AKOTHEE Showing live on Italian international TV💪 interview by Stella Pende 🙏🏾🙏🏾🙏🏾🙏🏾 ,I dont know the plans God has for AKOTHEE but I know He has plans 💪 By management. : NELSON OYUGI 👉👉🇲🇽 https://www.tgcom24.mediaset.it/televisione/torna-confessione-reporter-i-reportage-di-stella-pende_11762832-201902a.shtml

This comes as Akothee continues to recover after collapsing on stage while performing at the Luo Fest in Kisumu.

While some sections have claimed she faked it for publicity, Nelly Oaks said Akothee fainted because she had gone into heavy activity despite being asked by doctors to rest after she was discharged from hospital last week.

“She is in Kisumu still resting at the Acacia Hotel and trying to recover because she went into heavy activity just after checking out of the hospital and went straight into rehearsals she didn’t want to disappoint her fans,” he said.

“She had actually run her set for 45 minutes and it was during the last 30 seconds of the last song that the unfortunate incident happened. She had lost lots of breath because of the up and down activity. So that’s what forced her to faint but the good news is we got her to the car and we didn’t have to go all the way to the hospital because she recovered slowly and we gave her vitamins and juice and she was back to normal,” added Nelly Oaks.

“She has been recommended bed rest and she is headed to her home in Rongo where she is going to rest for at least two weeks.”

Loading...
Nyce Wanjeri Responds to Alleged S*x tape < Previous
Oguna Asks Kenyans to Buy Water Tanks for their Parents this Christmas Next >
Recommended stories you may like: