“You’re Like a Bat.” Raila To DP Ruto After Kibra Win 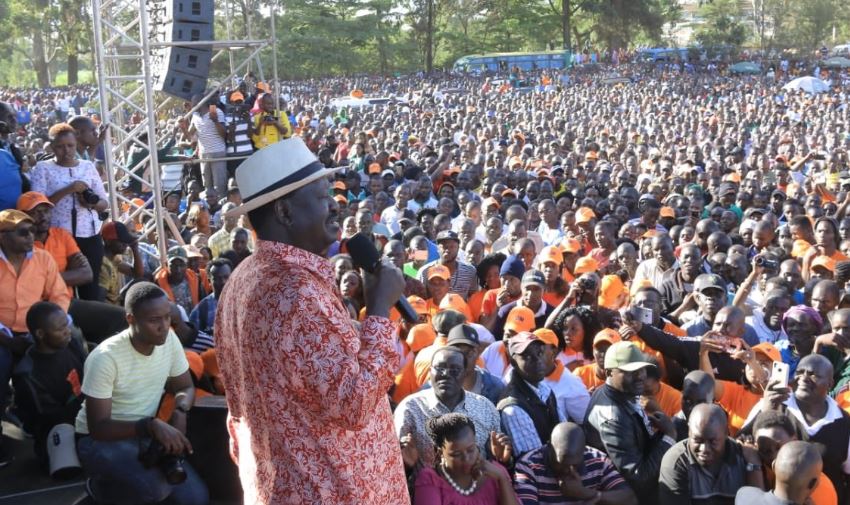 According to the Opposition Leader, the DP is like a deceptive bat that is neither a bird nor an animal. Raila further referred to Ruto as a “a two-faced politician”.

“You say you are a man of God [but] you are a thug. You are behaving like a bat. Long ago the bat used to deceive other animals. When it was with the birds it told them how it could fly and perch. It was then welcomed and given food. When it went back to other animals, it told them how it was one of them and that it had ears and teeth. It was then welcomed,” Raila said on Sunday.

“But at last, both the birds and other animals realised his deception and that was its end.”

Raila also hit out at the DP for blaming the ODM party for instigating violence in Kibra. He said Ruto became bitter after losing the parliamentary seat despite spending a fortune hence the claim that ODM meted out violence on its opponents.

“They are saying Raila brought violence in Kibra. They are just bitter. They are the ones who killed our person in Ganda(Kilifi),” he said at a thanksgiving rally at DC Grounds in Kibra.

Raila further warned DP Ruto that the Kibra mini-poll won by Imran Okoth set the stage for the 2022 general election.

The former Prime Minister said the victory showed that Kenyans are ready to abandon politics of tribalism and discrimination.

“The by-election has shown that tribalism will no longer decide elections as Imran received votes from all tribes. Kibra has set an example and shown that Kenyans are tired of politics of lies. They have shown that money cannot decide an election,” he said.

“You can have a lot of money but Kenyans are tired of corrupt leaders. They will take your money but vote for leaders of their choice.”

Mr Odinga also spoke on the much-awaited BBI report saying it will soon be handed to President Uhuru Kenyatta.

“The report It will put to an end politics of discrimination and of money. It will bring unity among Kenyans. This is the Kenya we want to build. This is what BBI is all about,” he said.