Judiciary Chief Registrar Anne Amadi confirmed the decision in a letter dated November 6. She stated that the implementation of all approved activities should, therefore, proceed as planned.

“We are pleased to inform you that the Judiciary’s Recurrent and Development budget for financial year 2019/20 has been restored and the budget for the half-year been uploaded in IFMIS as approved by the National Assembly. Authority to Incur Expenditure (AIE’s) for the court stations and Tribunals are being processed and will be issued in the shortest time possible,” Ms Amadi added.

In addition to Maraga’s outcry, a court compelled the Treasury to restore the funds in response to a petition filed by LSK on October 25.

The Judiciary had requested Sh31.2 billion but Parliament allocated it Sh14.5 billion, which Treasury cut to Sh11.5 billion.

On Wednesday, the Law Society of Kenya (LSK) got an extension of the Court orders pending the hearing and determination of the case. 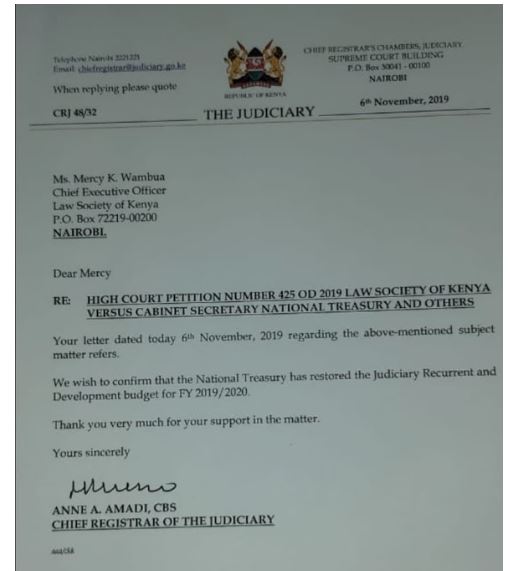 Loading...
Ben Kitili’s Wife Advises Couples in Interfaith Relationships: “Fight For Your Love” < Previous
The Trending Images This Friday Next >
Recommended stories you may like: