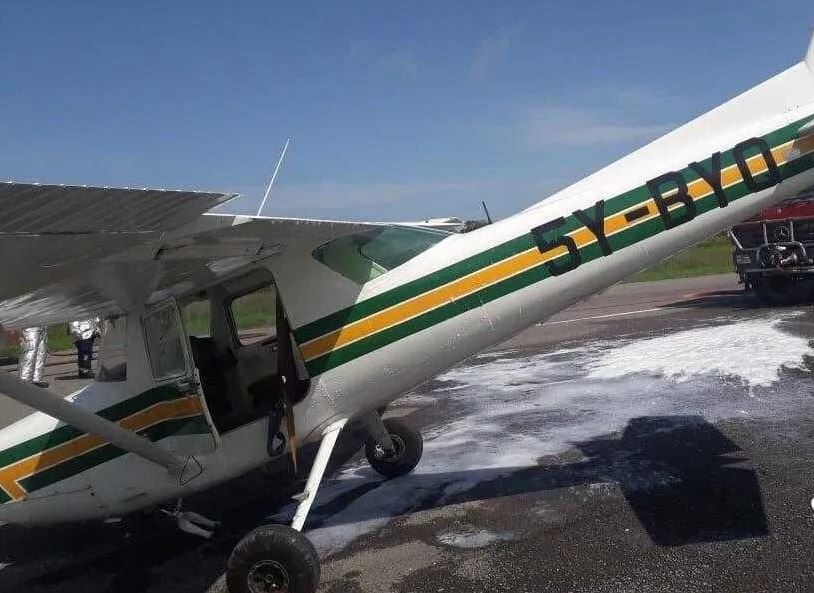 A trainee pilot and his instructor were evacuated and treated for trauma following a two-hour flying ordeal above Malindi after their light airplane lost one of its wheels and crash-landed at the Malindi airstrip.

The Cessna aircraft belonging to the Kenya School of Flying branch in Malindi landed without the wheel on Monday as ambulances and fire brigade teams rushed to the scene.

The pilot trainee identified as Emmanuel Omindi was advised by air-traffic control at Malindi airstrip to fly for two hours in order to expend the fuel in the craft.

Speaking on Tuesday, Malindi airport manager Mohammed Karama said the fuel had to be exhausted to avoid explosion while crash landing.

“The control tower noticed that its fore wheel was missing while mid-air and the male student pilot was advised to fly for two hours due to security reasons,” he said.

Karama added that the pilot and his instructor did not suffer injuries, although they were taken to the hospital for psychological counseling due to trauma.

He noted that security teams, the fire brigade and medical personnel’s from Tawfique hospital arrived at the airport even before the aircraft crash-landed.

“The cause of the accident will be established by aviation investigators, luckily the incident happened when the airspace was not busy and it, therefore, did not disrupt the normal operation,” he said.

Karama said a section of the runway and the aircraft were damaged due to the landing impact.

Loading...
Another Body Retrieved From Nairobi River < Previous
The Trending Images This Wednesday Next >
Recommended stories you may like: